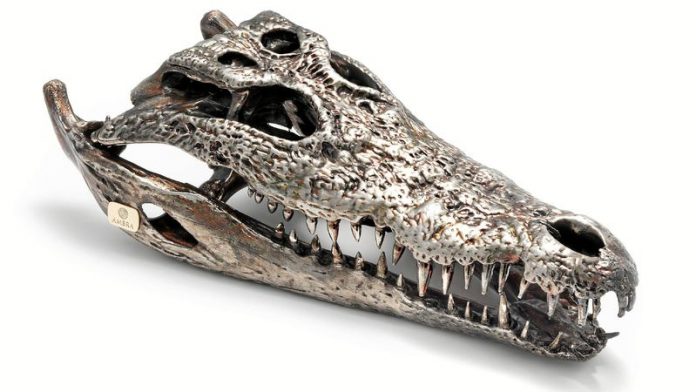 She decided to pay homage to the dead with a range called Skullchemy, a collection of metallised animal skulls, each one unique and hand-treated, bone dipped in bronze or silver and then given an antiqued patina so that “all the recesses and intricacies come out in the skull”.

The treatment results in an object that “looks and feels like metal” Gambale explains, although she won’t go into detail about the process she “spent a long time developing” as, she says, there have already been attempts to copy and ­appropriate her technique.

Once the skulls are metallised, Gambale embellishes them further with precious stones on the bone and often around the eye sockets.

“Diamonds are so polished and precious and usually associated with jewellery. When they are set against the unevenness of the bone, it’s quite interesting,” she says.

To this, she adds hand-carved creatures, cast in gold and silver, “moths, snakes, ladybirds, spiders … They are magically real,” she explains. “They look real, but of course they’re not.”

The range of skulls — crocodile, baboon and caracul, all ethically sourced from farms — is the realisation of what Gambale says is a “personal dream of combining diamonds, sculpture and natural form”, but also contests what she sees as the reliance of local artists on “looking to the West for what’s cool” and the absence of an African expression of luxury.

“I’m challenging the conventional thought of an African curio,” she says, working with “something we all take for granted, making inanimate objects into something precious”. By embalming them, Gambale says, they become keepsakes rather than novelty items, a veneration of the deadx rather than a resource we waste.

Gambale has also produced a range of smaller crocodile skull and vertebrae necklaces.

Gambale sells her skulls in London (at Wolf & Badger in Notting Hill and Dover Street) and is “just putting her feet out” in Cape Town (at Merchants on Long). She says that each metallised bone skull comes with a certificate and requires a special export permit for sale overseas.

There are also bone-free ceramic and resin alternatives, which are “cast in moulds and then finished with paint and sealed. It’s a totally different process. The ceramic ones are kind of animated. They look more comical.”