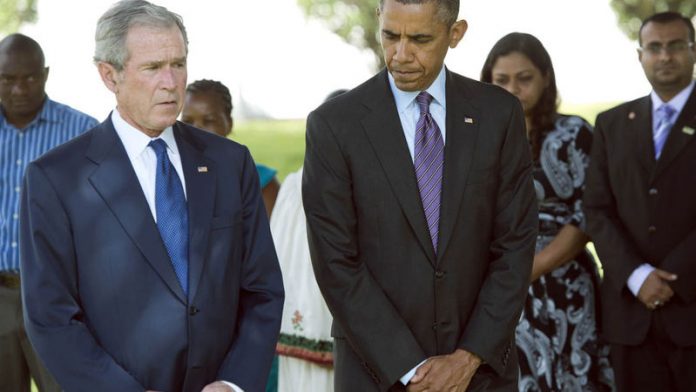 US President Barack Obama and former US president Bush stood together in Tanzania on Tuesday to commemorate the victims of the al-Qaeda bombing of the US embassy 15 years ago – an attack that foreshadowed the United States's present military build-up in Africa.

The two men bowed their heads in silence at a memorial stone in the new embassy compound in Dar es Salaam to the 10 Tanzanians killed and 85 Americans and Tanzanians wounded in the bombing on August 7 1998.

They then briefly spoke to survivors. But there was little personal interaction between the two men.

The ceremony took place at a time when the United States is stepping up its role in the fight against militants in Africa.

On the same day as the Tanzanian attack, al-Qaeda also bombed the US embassy in Kenya. Those assaults proved a precursor to the September 11 2001, al-Qaeda attacks on US cities and the subsequent US-led invasions of Afghanistan and Iraq ordered by Bush.

Obama has spent his tenure winding down the wars in Iraq and Afghanistan and reacting to an economic downturn that Democrats blame on Bush's policies. Republicans in turn said Obama's actions have been bad for growth.

Obama praised Bush
But on his three-nation African tour, Obama offered praise for the former president and described Bush's programme to battle HIV in the African country as a "crowning achievement".

Obama arrived in Tanzania on Monday on the final leg of his tour of Africa. His Republican predecessor was coincidentally also there for a conference on African women organised by the George W Bush Institute.

First Lady Michelle Obama and former first lady Laura Bush also planned to team up at the conference on Tuesday for a joint discussion on promoting women's education, health and economic empowerment.

Obama's trip means he is hot on the heels of Chinese President Xi Jinping, who included Tanzania on his first overseas tour in March.

Talk of an economic rivalry in Africa between Washington and Beijing has been a theme of Obama's trip. – Reuters