Bronwyn Lace's work has intrigued me since the 2011 Everard Read exhibition Horse: Multiple Views of a Singular Beast. In it Lace created Airs above the Ground, a combination of bone, fishing line and carefully calibrated weights that dramatically suspended the parts of a horse skeleton in the space of an otherwise empty room. The mechanism suggested part puppet, creating the appearance of an ethereal being, while the bone display gave the creature the look of a prehistoric beast.

The work brought together art and engineering, with no evidence of softness or sentimentality. So Lace is not who I expect to meet. She is younger than I imagined, prettier and not at all severe. She speaks in exceptionally long sentences, her complex thoughts fluidly holding the structure of our conversation together.

Her work deals with issues most people can scarcely confront. She presents the beauty in loss, entropy and collapse, giving expression to the afterlife of life itself. Her preoccupations are not driven by religious inclination but rather by a fascination with structure and process, with what happens when the carapace of life disintegrates.

Her latest exhibition, Resuscitate, at the NiroxProjects at Arts on Main, is all about the moment of structural collapse.

Her works are always site-specific. She says: "It's quite difficult because you never own the space that you produce in, so the work has this life-span and then is taken down. I never like to reinstall the same work."

I ask what happens to the work afterwards.

"This exhibition is an answer to that. Resuscitate is specifically about the fact that after some time creating these works I started a little private ritual where I would collapse them afterwards. It became a little funeral service for the work and I began to recognise that this was a part of my process that needed to move out of private space and into the conversation with the viewer."

The show displays a series of installations either in the process of collapse or in their collapsed state. "They are works that I have made for various spaces and reasons and now it's their second life."

Fishing line is her paint. "I love that it holds the light and holds its environment because of the quality of light. It is an absolute reflection of the space and at the same time you can fix it in two points and it becomes quite solid."

As solid as it can be, fishing line also creates structural fragility. 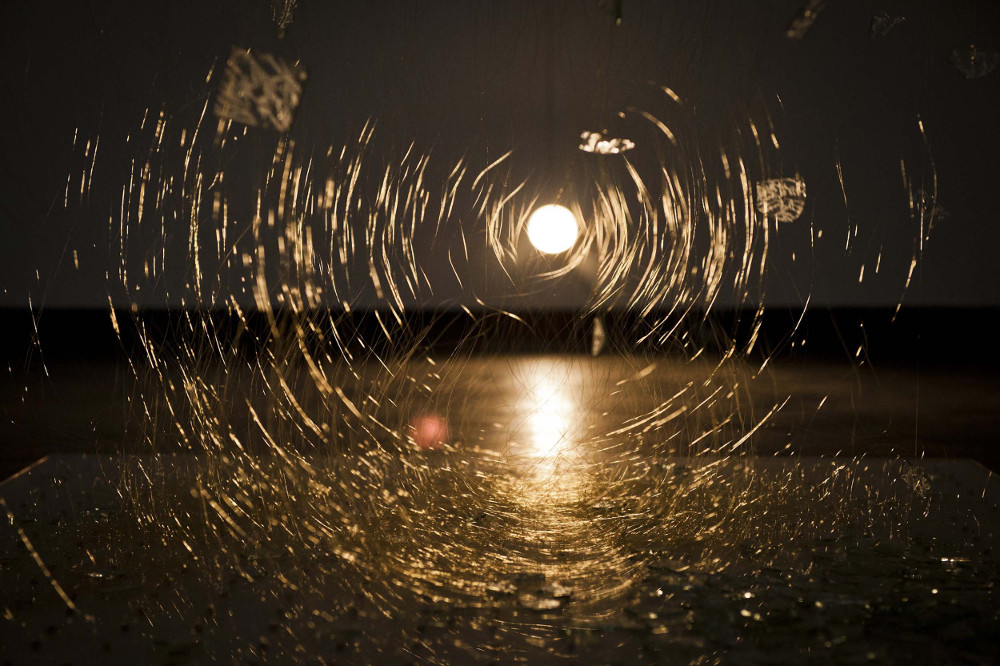 "I would put in place these elements to create a form and, at the end, I would release that and just let gravity and chance take effect."

Her art creates the perfect visualisation of what it means to let go, her work profoundly influenced by growing up with a mother who was a hospice nurse.

I ask about the science of it.

"What I do is very intuitive. I don't calculate it on paper before I begin. I work always in 3D and I relate the size and shape to my own body and then to the site I am standing in."

She finds it interesting that people draw references to science and maths from her work. If anything, she grew up intimidated by these disciplines. Her natural talent for languages and art created an expectation in teachers that her talents lay only there.

"I suppose my work was a reaction post my education to those insecure feelings around particular topics."

Her interest in the crossover between art and other fields fuels her work. Her materials are mostly natural. Lace is a collector. Her small treasures are the remnants of the lives of others–bones, shells, casings.

"Whenever I come across a dead insect floating in a pool, or in a light fitting, or on the road, I collect it. I have been doing that for years. I find that the structure of an insect is always unbelievable, showing remarkable architecture and engineering that on a human scale would be absolutely mind-blowing."

The structures inform the beginnings of her own and the way she likes to build. "I do very much build an installation."

For her previous exhibition, A Tendency towards Complexity, held at Circa Gallery last year, she created the Found Body series, using her collection of hundreds of insects and small creatures (each had been previously archived, their species and manner of death noted). The insect bodies were embossed into rich cotton paper by putting them through an etching press. The process mimicked natural decomposition. A dead scorpion held its form on the first press, started to disintegrate on the second and on the third became dust. She deliberately called them bodies and sought to create the effect of a mortuary in the display.

"We seldom think of an insect as a body, as a life, but I find it fascinating when you see an insect die, and the twitching stops. What is that mechanism that has stopped? Why is it so easy to recognise a dead thing over a live thing, because you can tell immediately. From that we all know death."

Lace says her works stand as a metaphor for her thoughts about life and death, and being able to stand outside her thoughts and view what she has produced impels her to continue creating her art. The process never offers her answers; rather, it asks more questions.

She thrives on audience response, on the curiosity of the viewer. She mentions that she was interested to see how a gallery visitor would get involved with the horse.

"There was this potential for performance. It was an installation the audience could play with, slackening and tightening the line. You could just lift one of the hundreds of weights along the wall."

But the only people who did that were children. "They saw the potential naughtiness of it. As a new mother, you see how freethinking children are. Adults are more concerned with what is allowed."

It was the interaction with children over the work that breathed life into the horse. She says, while laying out the bones in a street-level studio in Maboneng, where she lives with her husband, Marcus Neustetter, children from the area would knock on the window and ask her questions such as: "Did you dig that dinosaur up yourself?" and "When did you kill that dragon?"

She noticed that none of them thought the bones belonged to a mundane beast. In their heads, it was a magnificent creature and that response determined the making of it.

The themes of her work have looped during the 10 years she has spent as a full-time artist, the next exhibition suggested by the previous one. It's clear that the questions she grapples with have no easy answers but propose that art can perhaps bring a measure of clarity to areas that science and religion struggle with.

Resuscitate is on until September 22 at NiroxProjects, 264 Fox Street, Arts on Main, Johannesburg.