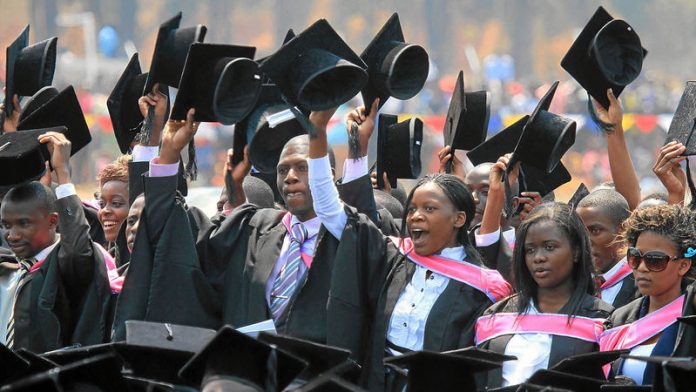 Clarence Siziba is your typical used car salesman: he talks fast, has pointy shoes and wears large shades. Except that on the wall inside his makeshift office is his three-year-old science degree.

As he flips through a catalogue for a truck a client is looking for, he jokes about how little he is applying what he learned in four years of ­university in his line of work.

“I wish I could say there’s a ­science to selling cars, but this is just a way to make a living,” he says.

His car lot stocks imported used cars from Japan and the United Kingdom. Like many of the hundreds of similar car lots that litter Harare, his business barely breaks even. But he is grateful that he at least can make a living.

Each year, Zimbabwe churns out close to 10 000 graduates from its 13 universities. But as businesses downsize and lay off workers, few of those graduates have any real chance of a job. And so they end up in the informal sector, hustling with everyone else.

According to Zimstat, the national statistics agency, about 60 143 students enrolled in universities last year.

Tough job market
But after the joy of being capped at graduation, the reality of the task of cracking an increasingly tough job market soon sets in.

Labour unions say at least 100 000 jobs have been lost since 2004. And while the economy has experienced some recovery over the past four years, companies have had to lay off workers to cut costs.

A recent report by the national pension fund said that more than 700 companies had shut down in Harare alone since 2011, swelling the jobless ranks.

There is no agreement on exactly what Zimbabwe’s unemployment rate is. Various sources put it at anything between 70% and 80%. However, the government says these figures ignore the contribution of the informal sector, and it counts the self-employed among the employed.

Zimstat says unemployment actually stands at 10.7%, a figure dismissed by economists and unionists.

Zimstat director Mutasa Dzinotizei says these statistics are drawn from a survey held between 2011 and 2012, which shows that the other widely used figures were inaccurate.

Opponents unsure
Even the government’s opponents are unsure. While he was finance minister, Tendai Biti said those touting jobless numbers as high as 85% were “textbook economists” who ignored the informal market.

Yet, his own party puts the unemployment rate at 80%, saying that it may have peaked at 92%. Zanu-PF, in its election manifesto, put the rate at about 60%, higher than the official number.

What is not in dispute is that much of Zimbabwe’s formal economy has been decimated, replaced by a booming informal market. A Zimstat survey, which sampled more than 6-million people between the ages of 16 and 18, revealed that 22% of the population was in formal employment last year, while 57% were farmers or ran small businesses. About 3.7-million Zimbabweans had some sort of involvement in informal trade.

“What we agree on, and what you will not hear any of the bureaucrats argue with, is the fact that we are not creating the jobs that our young people need,” he says. “We should worry when our graduates take odd jobs to survive.”

According to the central bank, the informal sector now contributes between 60% and 70% to Zimbabwe’s gross domestic product, six times the level a decade ago.

Where graduates end up
As a sign of the growing informal sector, a new report by researchers Knowledge Transfer Africa found that about $14-million exchanged hands between January and June this year at Mbare Musika, the country’s largest vegetable market.

So this is where many of the country’s graduates end up; barely making a living, and not using any of the skills they have gained.

A survey by human resources experts Industrial Psychology Consultants shows that graduates are spending more than five years after graduating without formal jobs in their field of study.

When asked how they were earning a living, most graduates responded “by indicating some form of buying and selling. Many ideas were pointed out, like chickens, cellphones or some form of services they are offering to people”, the report said.

Says Memory Nguwi, who heads the company that did the research, “The huge disconnect between job creation and the skills supply is illustrated by a paradox of the current economy: persistent, high unemployment exists alongside severe skills shortages and unfilled positions in many companies.”

It is a situation car dealer Siziba knows too well. “The country needs our knowledge, but then, on the other hand, we are not needed.” Persistent high unemployment exists alongside severe skills shortages and unfilled positions in many companies

Capped by the president
It is a ritual most graduates look forward to: bending a knee in front of President Robert Mugabe and receiving a gentle tap on the head.

Despite the hostility among students, as campuses have long been a breeding ground for opposition politics, everyone still wants to graduate top of their class to qualify to be capped by the president.

“It’s kind of funny that we campaign a lot against him, against how he has ruined education, but still scramble for his blessing,” says blogger Tavaka Nyoni, who graduated with a bachelor of commerce degree from the University of Zimbabwe last year. “It’s like much of Zimbabwe really; we say we despise him [Mugabe], but there is a secret admiration for him somewhere in there.”

Over the past few months, Mugabe has capped thousands of graduates from at least five universities across the country. Despite his age, it is not unusual for him to spend hours at each stop capping hundreds at a time.

He once capped thousands at two separate universities in a single day.

Last week, after capping more than 1 200 at the Chinhoyi University of Technology, the jubilant graduates broke into chants of “Gushungo” as he conferred degrees, state media reported. Gushungo is Mugabe’s totem, popular among his supporters.

In September, while capping more than 2 000 at the University of Zimbabwe, there was a similarly jubilant reaction among graduands. But the popular ritual is merely a passage for graduates from student to the ranks of the unemployed.

“Every time there is a graduation at any of Zimbabwe’s universities and colleges, the national unemployment rate goes up,” quipped Pride Mkono, the leader of the national students union, Zinasu, at its conference.

Our ancestors worked less and had better lives. What are we doing wrong?

Workplace diversity is under the spotlight