A year for eating dangerously 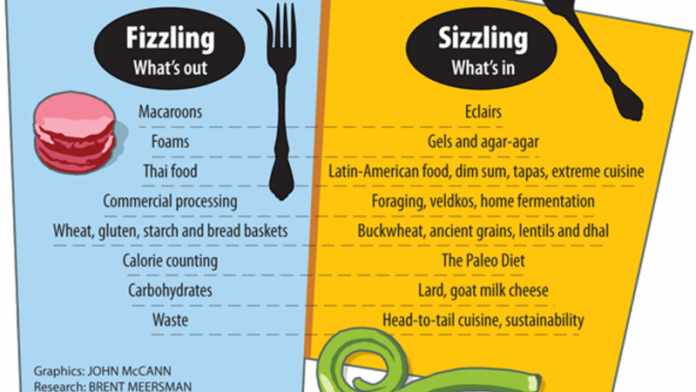 Search for "food trends in 2014" on the internet and you will be told macaroons are out and éclairs are in, carbohydrates are out but lard is back, cauliflower is the new Brussels sprout, Thai is passé and the flavours of Latin America are set to conquer the world.

Some tea-leaf readers are more "scientific" than others. For instance, the American National Restaurant Association took the trouble to survey 1 300 American chefs. Its findings were – well – predictable: preferences for what is local, environmentally sustainable and organic continue to drive trends. (Even if you have no conscience, it is now de rigueur to consult your smartphone WWF-Sassi app at the restaurant table to check whether the fish on the menu is harvestable.)

Ethical, "cruelty-free" and free-range meat are now routinely flagged on menus even at family steakhouses, and small, boutique butcheries are reappearing in the city.

Another trend broadening its reach is foraging. Expect to see far more South African chefs incorporating wild food and veldkos on their menus. In line with our democratic project, the desire to experiment, to rediscover indigenous plants and recipes, and crossover cultures continues with our intrepid chefs.

In fine dining restaurants, foams have lost their frothy novelty, but gels and playing with agar-agar remain popular. Sous-vide cookers and dehydrators are no longer rarities.

Affordable kits and new appliances are putting molecular gastronomy within the reach of domestic kitchens. Home cooks are generally taking a more scientific approach towards cooking, following such outfits as the American Test Kitchen and authors such as Harold McGee and modernist cuisine exponent Nathan Myhrvold. Chefs and restaurateurs have to keep ahead of the patrons.

The domestic cook is distilling liquor, making homemade ciders, and engaging in all kinds of fermentation, including making sourdough bread. Sour as a taste is finally being redeemed. With the growing number of Asian supermarkets some of us are even producing our own kimchi.

But fusion cuisine is giving sway to Netspeak "culinary mash-ups".

Cheeses are mushrooming locally, with goat-milk cheeses top of the bill. Soon it will be seen as unpatriotic if your cheese board doesn't also feature half a dozen local varieties.

North America is largely responsible for turning discoveries into global trends. Entry into the tea market by Starbucks is sure to give tea new prominence. I predict you will soon see tea leaves cropping up on dinner plates.

In the United States, calorie counting has taken a knock for being misguided and dangerously obsessive. Instead, John Durant's palaeo diet (The Paleo Manifesto: Ancient Wisdom for Lifelong Health) went big. It cuts out processed foods, dairy and the grains of our Neolithic revolution – wheat, maize and rice – and favours vegetables, seafood, meat and bingeing on fat. There will be far less starch on restaurant plates in the year to come.

Wheat and gluten are still under suspicion and surveillance, and buckwheat is its latest usurper. As the bread baskets are increasingly left to slowly stale on tables, restaurateurs will tire of throwing them out and start providing alternatives.

Meanwhile, rediscovered ancient grains such as freekah and chia may yet go the quinoa route to fame.

I anticipate there will be more "resistant starches" on dining plates, such as lentils, dhal, and maybe wild rice; more flageolet than potato with your lamb.

Another cultural change is that people going vegetarian and vegan are no longer seen as loopy. Restaurants with menus that have very limited vegetarian options are definitely set to lose out.

Small bites such as dim sum and tapas, plus tasting menus, appeal to our burgeoning eclectic habits and the 21st-century diner's sense of omnivorous adventure.

There are also several fads still to prove themselves as trends overseas that currently hardly feature in South Africa. It will be worth watching to see whether any of these catch on here in 2014. Cape Town has that irrepressible hankering to be internationally relevant.

One of them is eating "head to tail". Consuming every part of a beast is apparently going to save us from starvation now that seven billion people seem to have disproved Malthus. Chris Consentino is one of the movement's stars. At his Incanto in San Francisco, you might start with brain custard; then have an offal pasta with pork skin substituting for the actual pasta; for mains, tripe and spleen with artichokes and mint; followed by an oyster, oxtail and beef tendon broth; and finish off with a dessert of foie gras candy corn.

Dana Goodyear in Anything that Moves: Renegade Chefs, Fearless Eaters, and the Making of a New American Food Culture journeyed into the underbelly of "extreme cuisine", much of it based in Los Angeles eateries. She ate "delicious" ant pupae at a pop-up restaurant and drank coffee made from beans passed by a civet cat (only one place I know serves this in Cape Town), but she gagged at pidan – the putrid, sulphurous "100-year egg".

Insects continue to hover on the periphery, making occasional appearances in fine dining establishments and even supermarkets. Diners seem largely unpersuaded, but the idea is not going to go away in 2014, given the enormous pressures on the environment and the obvious logic of using rich, copious, cheap protein flying and crawling all around us. Various South African peoples have been eating locusts and thongolifha stink bugs for centuries, though I admit I live with the contradiction of relishing prawns but stopping at crickets.

If insects are not your thing, try jellyfish and seaweed. I've noticed seaweed turning up in everything from my health drink to my haute cuisine salad. The reasoning here is that, instead of eating fast diminishing and scarce food resources, we should concentrate on overlooked, abundantly available, sustainable foods, such as invasive species.

In recent years, jellyfish have reached plague numbers because of environmental changes, and have caused all kinds of damage, including imperilling nuclear power stations. We'd be doing the oceans and ourselves a great service by consuming them in vast quantities.

Raw foodism never really took off. Now it has started to transmute into live-food veganism with fermented foods and germinating sprouts. But this has philosophers such as Michael Marder objecting that our total instrumentalisation of other living beings is thoughtless when it comes to plants. Defining what you do (eating live plants) purely by what you are not doing (not eating dead animals) doesn't let you off the hook of taking a life force.

Encouraged by the age of reality television and the publicity value of shock, live animal food is being touted – freshly opened oysters and sea urchins, live shrimp in liquor (China), live baby octopus (at some restaurants in the West now), maggot cheese (Sardinia) and witchetty grubs (Australia). Returning to South Africa, the mopane worm and the township smiley (sheep head meat) no longer seem so daring.

The year ahead promises to be another epic epicurean year and Cape Town is World Design Capital to boot. Restaurants and coffee shops will continue to combine with retail; delis have added books, fashion and trinkets. Gourmet food trucks have become more visible (there's even one parked outside my gym these days). Organic and farmers' markets are crowding the weekly and seasonal calendars. Pop-up restaurants still delight.

Finally, there is one prediction of which I am absolutely certain: it is all going to cost more.

Wine of the week

Few wine farms are more environmentally responsible than the handsome Waterkloof estate on the slopes of Stellenbosch's Schapenberg, looking out over False Bay.

It's as green as green can be. But not this sauvignon blanc in Waterkloof's Circumstance range.

If you're wary of sauvignon because of the prevalence of insistent green pepper and grass flavours and enough acid to satisfy a car battery, revel safely and happily here.

Ripe but subtle peachy fruit has an interesting citric twist, all wrapped up in freshness and real harmony.

It's easy to love this wine, but the refined elegance and balance demand respect too.

Not generally a great sauvignon fan, I'm won over; as the maiden offering of new cellar master Nadia Barnard, this portends great things from Waterkloof.

It's not cheap — but most sauvignon is overpriced compared with chenin blanc, say, and many pricier than this don't dazzle as convincingly.

In brief, a wine offering great pleasure, and good value too. — Tim James

Despite the strain of lockdown, some restaurateurs are keeping bellies full
Read more
Africa

The recent addition of cookbooks by black authors to mainstream bookstore shelves reflects the demand for South African food and cooking culture in the country.
Read more
Special Reports

Delhi’s food — from the street fare to fine dining — stirs together what the ruling party seeks to divide: people across class, religion and caste
Read more
Advertising
Continue to the category
Education