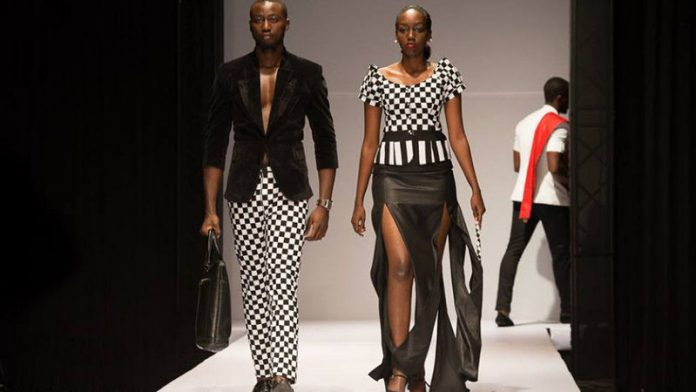 The fashion industries of East Africa are still in the nascent stage, viewed less seriously than other sectors and under-resourced with no technical schools. But those with a love for fashion have embraced innovation when it comes to clothing, perhaps because designers face stiff competition from the region’s booming second-hand clothes trade.

Western imports with the ability to clothe the masses cheaply are pushing designers further than ever when it comes to breaking boundaries. And Kampala, Kigali and Bujumbura showed Lagos and Johannesburg that they are style forces to be reckoned with at the launch of a Great Lakes fashion initiative on Saturday.

Kampala Fashion Intro, held at the Ugandan capital city’s Serena Hotel, showcased the creations of 13 fashion designers on 33 models from Uganda, Rwanda and Burundi to “promote unity in the region, and fashion and the arts as a serious business”. It is the first in a series of events planned in these countries and will eventually include Kenya and Tanzania.

“We need to embrace our Ugandaness and love Made in Uganda products,” said Anna-Clare Lukoma (35), who teamed parachute hem dresses with kooky glasses, turbans and statement jewellery from local brand Balungi. Balungi’s creations were made from horn, banana fibre and paper sourced in Uganda.

Local inspiration
Lukoma drew inspiration for her Lulu label collection from local culture, using a palette of earthy oranges and browns, and black and blue.

“Kampala is so chaotic that we need to create our own zen moments, and what better way to do that than drape ourselves in calm, luxurious fabrics that are comfortable and easy to wear,” she said.

Lukoma launched Lulu in 2011, but now wants her involvement in the industry to “stretch into making a positive impact on development and social consciousness in Africa. “We have more than 80% of our able-bodied youths unemployed in Uganda,” said the designer, whose clothes were part of a United States Urban Outfitters African Bazaar pop-up shop last year.

“In our jaajas‘ [grandmothers’] times, most people knew how to sew and took pride in creating replicas of high-quality foreign garments. These skills were not transferred to the next generation because academic skills became more revered.”

Behind the scenes
LDJ Productions assisted the inaugural Great Lakes Fashion Intro on the technical side. The production company has been behind the scenes at New York Fashion Week for the past 15 years and has also helped the Mumbai, Toronto and LA editions.

After working on the second Kigali Fashion Week in Rwanda in November, LDJ Productions ventured into neighbouring Uganda and is now looking at developing a business plan for its project there. President and chief executive Laurie DeJong said Burkina Faso and other West African nations had approached the company about working there.

“The whole idea is to bring our staff to underdeveloped countries to create pop-up workshops, then end in the production of an event,” DeJong told the Mail & Guardian.

“We don’t want to go on the ground and just produce a show, but want to share our skills, with the goal of the country being able to sustain it on their own after a few seasons.

“The vision is to assist with economic development and provide opportunities for woman via various arts fields.”

Business benefits
Cynthia Rupari (30), a Rwandan model-turned designer, said she’d benefited from being involved in the second Kigali Fashion Week. “I got some orders after it and that’s when I started to be known as a designer, not only as a model. I learnt how to make it.”

Using fabrics sourced from West Africa, her Kampala Fashion Intro range was a mix of evening dresses and sharp suits for the office in bold red and black, the result of Rupari having started work on the range around Valentine’s Day.

The designer has a small showroom at her Kigali house and an online shop, but hopes to open her first Rwandan store this year. She continues to work in banking for the time being.

“Rwanda is a very good place to do business [and] such a peaceful country in the region, so many investors around the world are dreaming of doing business there,” she said.

Next door in tiny Burundi, the organiser of the first Bujumbura Fashion Week, Cynthia Munwangari, hopes to put the country on the map not only as a fashion destination but also as one for tourism and investment.

The theme of the debut event is “expressing our potential through fashion”, said Munwangari. “It’s to put Burundi in the sights and minds of the entire world as our fashion designers are exposed to the rest of the world.”