A sonic journey with Vuma Levin 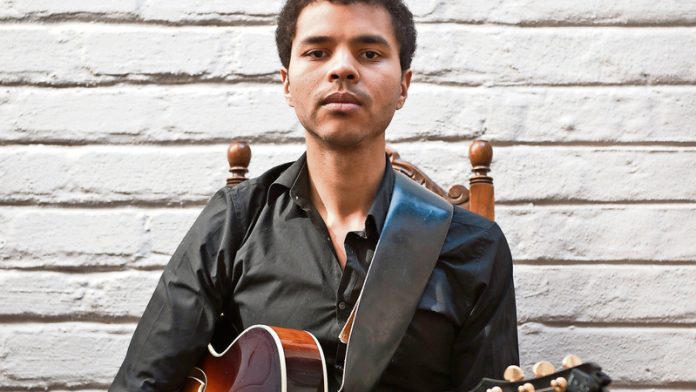 Vuma Levin is destined to be one of South African jazz’s greatest musicians – the 28-year-old guitarist is a purveyor of a liberal kind of jazz whose neglect of genre specifications is the strongest weapon in its arsenal.

Now, in the wake of having spent five years in a kind of personal exile in the Netherlands where he has been studying music, the guitar-wielding Levin is once again on the road for a winter tour in South Africa to support his latest album.

According to the Swaziland-born guitarist, the self-imposed estrangement from his “homeland” was part of a quest to quench his thirst for new experiences and musical paths. “I always wanted to leave home for a bit to try to grow personally, musically and intellectually. Amsterdam was relatively well priced and has one of the top music departments in Europe,” he said.

Levin, who has completed his undergraduate degree and is currently completing his master’s in jazz guitar performance at the Conservatorium van Amsterdam, admits that he is not sure whether he is ready to come back home just yet. Having lived and studied abroad for as long as he has, he says his sense of being displaced has been one of the most interesting aspects in his music-making journey.

Despite the Netherlands having been the playing ground of several South African jazz maestros of yesteryear, such as Julian Bahula in his prime and a young Thoko Mdlalose, Levin says jazz music from his country doesn’t seem to have made a mark for itself over there.

He says the jazz scene in that part of the world is vibrant. “The scene in Amsterdam is amazing. The standard of musicianship is incredibly high. There are jam sessions almost every night of the week and there are many, many musicians. It’s an incredibly inspiring environment.”

His debut album, which has just been released, features young European rising stars that include Italian bassist Marco Zenini and Spanish pianist Xavi Torres Vicente. Speaking about the genesis of his potent and ethereal offering, The Spectacle of an Other, Levin says he wanted to make an album that is both responsive and overtly political.

An old jazz idiom
“I started a cultural musicology course [in 2010 at the University of Amsterdam] and a course called Reading Black Music. What I got from the course was a desire to interrogate the manner in which Eurocentric acts of musical production have been used to collude with, propagate, re-enforce, construct and subvert colonially inherited power relations,” says Levin. “The music that I make is intended, at least in part, to respond to these tendencies and the essentialising they produce.”

The resulting music is a sonic journey through Levin’s hopes and fears, both as a musician and a South African. These are songs that are trying to soundtrack what it’s like to be displaced at home and abroad. It’s meditative and melancholic, and anchored by his guitar strings.

What is most impressive about the album is how decisive and lean it is. It would be easy for someone with talents as varied and adaptable as Levin’s to go overboard, particularly on a concept record like this. Instead, the offering is an exercise in patience and none of the songs on the album sound like fillers or place holders. It’s a record that ends just as you are in the middle of enjoying it – and that’s the point. It lingers precisely because the songs on it feel like the start and not the end of something.

Levin’s life story is evocative of an old jazz idiom that the best jazz players come to the genre by way of rock ’n roll and vice versa.

“I first heard jazz at a very young age. My dad used to play all sorts of music fusion – 1960s and 1970s rock like Jimi Hendrix and Led Zeppelin. Jazz was rare, but I distinctly remember having heard Kind of Blue and My Favourite Things and A Love Supreme early on in life. It took me a long time to gravitate towards, and then finally appreciate, jazz,” says Levin.

“I guess what attracted me to it was its harmonic and melodic sensibilities, the emphasis on timbre and dynamics and the whole instrumental angle. For me, it just meant the possibilities for abstraction, expression and interpretation were very broad.

His favourite music “changes all the time. Marcus Wyatt’s album Africans in Space is my favourite South African jazz album,” he says.

A multilayered piece of philosophy
The Spectacle of an Other edges towards being a multilayered piece of philosophy, one whose roots stretch as far wide as Carlo Mombelli, The Pharcyde and Achille Mbembe to orientalism and Afrika Mkhize. Levin’s challenge has been to take all that is orbiting in his headspace and package it in a cohesive way that makes musical sense.

Speaking about the aesthetic of his sound, Levin notes that it’s a mutating organism that is not yet free from the bonds of history.

“From an aesthetic standpoint, my aim is to create a music that occupies the space between various strands of popular music, jazz, Western art music (from Bach to Schoenberg) and the full array of South African music.”

Part of the allure of jazz is its flamboyance, but on this album Levin has gone for a lo-fi approach and dims the lights on the solo moments, opting for a sound that is distinguished by his band’s collective excellence. This results in a kind of tug-of-war with the audience upon first listen. Where you expect the solo to be you might be confronted with a litany of strings or the marching thud of horns. Everything is not as it should be and that is what makes it enjoyable.

Levin is tired of how jazz has become apolitical. He is a believer in the genre’s ability to tell stories. “Despite the absence of words, I think that instrumental music definitely has a semiotic dimension to it. However, due to a lack of words, the emphasis is on the abstract rather than the concrete. So the narratives that it is able to weave are primarily left up to the imagination of the listener.”

Levin’s music signals a return to what once made South African jazz music great and distinct: sincerity.

Asking him questions is like opening a minefield of references, each one of which makes its way into his musical mix. Asked about the title of the album, he breaks down how it was based on a chapter from a book by social philosopher Stuart Hall where he discusses the ways in which colonialism manifests itself through the creation of fantasies and fetishes about non-Westerners. This is heavy stuff and Levin likes it that way.

But the guitarist is not unaware of the music’s need to adapt to a contemporary vernacular; it must go where it’s needed and be heard by the people it claims to represent.

Blurred boundaries
“I think the good thing about jazz musicians of the here and now is that they are deconstructing the notion of bounded genre. Most contemporary jazz musicians use the vocabulary and improvisational practices of the tradition as a basis to speak in the cultural language of our times,” says Levin.

“When this is done in a nonreactionary manner, as an organic extension of one’s self-expression, that’s when the real magic happens.

“Jazz, as with all other forms of cultural production, is fluid, dynamic and ever-changing. It changes as society changes, to accommodate the stories that people want to tell and the ways in which people want to reflect on themselves and the broader contours of society,” he says.

This album and the tour to venues in Johannesburg, Cape Town and the National Arts Festival in Grahamstown signal the start of a three-way conversation between the audience, the music and himself. This, Levin says, is a conversation he is eager to have.

Speaking about what audiences can expect from him and his band as they hit the road, Levin points out that the music is the message.

“The people that I play with are young, dynamic and incredible musicians. People should just come for that alone. Over and above that the music is an attempt to reflect upon what it means to be South African in the here and now and I would like to share my vision of that with people.”

Zuma tries to turn his courtroom attack on Downer into...

Jacob Zuma has laid charges claiming that Billy Downer, and the NPA, have irredeemably tainted the arms deal corruption charges that have haunted him since 2005
Environment

At least 65% of the pellets in the cartridge hit the 16-year-old when he was gunned down in Eldorado Park, Johannesburg, allegedly by in-training constable, Caylene Whiteboy
Advertising