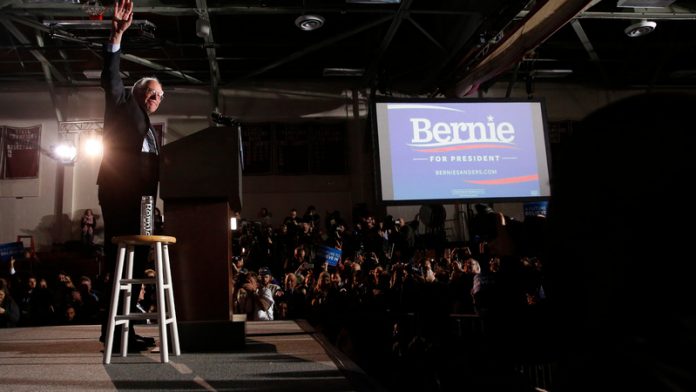 Disenchanted with the economy and Washington politicians, voters in the first two US primary voting races have responded enthusiastically to candidates for the November 8 presidential election they view as outsiders.

The results, though decisive, did little to clear up confusion about who would emerge as the establishment contender to Trump on the Republican side, and the campaign of Sanders’ rival, former Secretary of State Hillary Clinton, were defensive about her future prospects.

In a somber speech, New Jersey Governor Chris Christie said he would weigh his next steps in the campaign, depending on final results in the Republican race that appeared to show him far behind.

Trump’s win solidifies his front-runner status in the race to be the party’s White House nominee. The former reality television star has been cheered by his supporters for comments that others have derided as politically incorrect.

Trump (69) has campaigned to deport illegal immigrants and temporarily ban Muslims from entering the United States.

Trump was in first place with 34% of the vote. Ohio Governor John Kasich, aged 63, who staked the viability of his campaign on the New Hampshire outcome, was in second place with 16%, CNN said, based on an estimated 67% of returns.

Trump congratulated other candidates in the race but promised to soon return to his pugnacious approach. “Tomorrow: boom, boom,” he said, shadow boxing while his supporters cheered.

In his victory speech, Trump said Sanders “wants to give away our country.” He pledged to have business experts negotiate better trade deals and to “knock the hell out” of Islamic State militants.

Sanders, who describes himself as a democratic socialist, has called for eradicating income inequality, breaking up the big banks and providing free college tuition.

“Together we have sent the message that will echo from Wall Street to Washington, from Maine to California, and that is that the government of our great country belongs to all of the people and not just a handful of wealthy campaign contributors,” Sanders said in his victory speech.

Disenchanted voters
Independent voters wield special clout in New Hampshire, second in the series of state-by-state contests that lead to the parties’ formal presidential nominating conventions in July, because they can vote in either party’s primary.

At a polling station in Manchester, Joan and Roland Martineau said they voted for the two candidates they believed they could trust to shake things up.

Roland (73), a registered Republican, went for Trump, a man he said was “more honest” than other candidates. But he said he would back Sanders over Trump in the general election in November.

Some 73% of voters say they think the United States is on the wrong track, and these disaffected people make up a majority of the support bases for Trump and Sanders, according to a Reuters/Ipsos poll.

They are worried about the economy and distrust establishment politicians they perceive as being part of the problem.

Clinton campaign looks to South Carolina
Sanders had 60% of the vote based on 66% of the vote, ahead of former Secretary of State Clinton, who had 38%.

Clinton had for months been the front-runner nationally. But a Reuters/Ipsos poll done Feb 2-5 showed Clinton and Sanders now in a dead heat.

Clinton (68) congratulated Sanders (74) in a speech to supporters. She defended her progressive stances and vowed to be the candidate who fixes problems and not just state them. She appealed to African-American and Latino voters and acknowledged she had work to do winning over young voters.

“People have every right to be angry but they’re also hungry, they’re hungry for solutions,” she said. “I will work harder than anyone to actually make the changes that make your lives better.”

Clinton campaign manager Robby Mook said in a memo that the Democratic nomination would “very likely” be decided in March, with the support of black and Hispanic voters key to victory. The next primary races are in Nevada and South Carolina later this month.

“It will be very difficult, if not impossible, for a Democrat to win the nomination without strong levels of support among African-American and Hispanic voters,” Mook wrote.

Logjam in third place
A logjam of Republican candidates were in a dead heat for third place. US Senator Ted Cruz of Texas, who won the Iowa caucus last week, had 12%; former Florida Governor Jeb Bush, the son and brother of former presidents, had 11%, and U.S. Senator Marco Rubio of Florida had 10%.

Christie, who had counted on a strong showing in New Hampshire, was next with 8% followed by former businesswoman Carly Fiorina with 4% and retired neurosurgeon Ben Carson with 2%.

US Senator Lindsey Graham of South Carolina, who was a candidate in the race until he dropped out in January, predicted Bush would do well in the next primary, in his home state.

“The Bush name is golden in my state,” Graham said.

“Let me just say this from the party’s point of view: we need an alternative to Donald Trump or we’re going to lose an election we should win,” he said. – Reuters