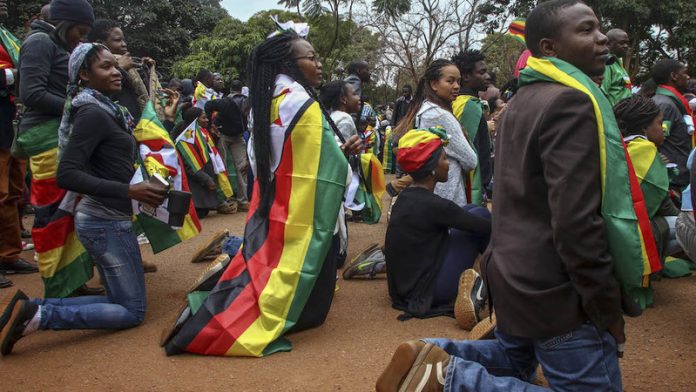 “You just go to Zimbabwe now and ask the people whether I should stand down. They will be angry with you.”

These were the words of Zimbabwean President Robert Mugabe in March this year when he was interviewed during a five-day state visit to Japan.

Over the years, Mugabe, a skilled politician with four decades of experience in politics, has mastered the art of deflecting tough questions, often by using “the people”.

Questions posed to him on when he would step down, who would succeed him and whether he would run for another term in office have all been left for “the people” to decide. In the process, Mugabe has cast himself as an onlooker and at times a hostage in office, who serves at the will of the people.

His own lieutenants in Zanu-PF are jostling to take over from him. They have often been reminded by Mugabe that they would need the support of “the people” first before they could possibly step into his shoes. Perhaps, inwardly, Mugabe also knows that none of his would-be successors has the appeal of his fiery oratory and the boldness to stand against the West, nor the political bravado to match his own – which renders them unattractive and unappealing to the people.

Yet the image Mugabe has so carefully built over the years – of being a man of the people – has been badly dented. A shutdown of the country last week by ordinary citizens, who mobilised on social media platforms, sent a message that they may no longer be fully behind him. Zimbabwe’s ruler and its citizens are worlds apart.

Mugabe’s own silence over the first shutdown more than a week ago is curious. Is he still too stunned by events as he tries to come to grips with the reality of the rift?

The citizens, however, care little about what is going through his mind. Instead, emboldened by the rare success of last week’s shutdown – which saw the central areas of Harare and Bulawayo looking like ghost towns – Pastor Evan Mawarire, one of the citizen movement leaders who mobilised under the #ThisFlag tag, has upped the ante against Mugabe.

With a Zimbabwean flag draped around his neck, Mawarire stood defiant on the steps of the courthouse even after his arrest this week and told the crowd; “Let’s remain resolute, the country we are building is ours.” A Harare magistrate on Wednesday dismissed the case against him after the state changed the initial charge of inciting violence to subversion. “He was not advised of the subversion charges before he was brought to court. He was not properly brought before the court and that’s why the magistrate refused remand,” his lawyer Harrison Nkomo told reporters.

As an individual, he had taken to the internet to vent his personal anger against the government, but now ordinary citizens had staged real protests on the streets.

The stakes are high. A shutdown was planned for two days this week, but the response was mixed. Some businesses opened in Harare and Bulawayo; others remained closed. A self-employed father of two, a truck driver, said there was no formal economy to talk of shutting down. “Over 80% of the population in Zimbabwe is self-employed, so it only hurts us further who survive on doing these odd jobs,” he said.

Eddie Cross, a senior official in the Movement for Democratic Change, led by Morgan Tsvangirai, estimated that nearly 40% of Harare was closed, but there were negligible signs of the shutdown being heeded in other parts of the country.

As long as the economy remains in tatters, Cross believes the citizen’s movement will gain traction. “I think we are in for a turbulent time.”

The list of demands from the citizen’s movement has already increased. It wants civil servants to be paid on time, corrupt ministers fired, police roadblocks and the looming bond notes to be removed, and an imports ban reversed.

“This regime is exhausted and clueless. It has no answer to the burning questions of the day. It has reached its limit and is at breaking point,” said Tendai Biti, a former finance minister and now the president of the People’s Democratic Party.

The people’s frustration is obvious, but Zanu-PF seems preoccupied with its own internal affairs. As citizens protested on the streets last week over nonpayment of salaries and the worsening economic slide, Zanu-PF’s politburo met at the party’s headquarters in Harare. By the end of the day-long deliberations, the party had expelled 13 party members, among them Chris Mutsvangwa, the former minister of war veterans. But there was no mention from the politburo of the unrest and demonstrations taking place on the streets.

On the eve of this week’s protests, the ministers of home affairs, defence and state security – Ignatius Chombo, Sydney Sekeramayi and Kembo Mohadi – said the police and state security were prepared for a showdown and protesters would face “the full wrath of the law”. But their message failed to strike fear into the hearts of citizens, who are demanding that Mugabe address them.