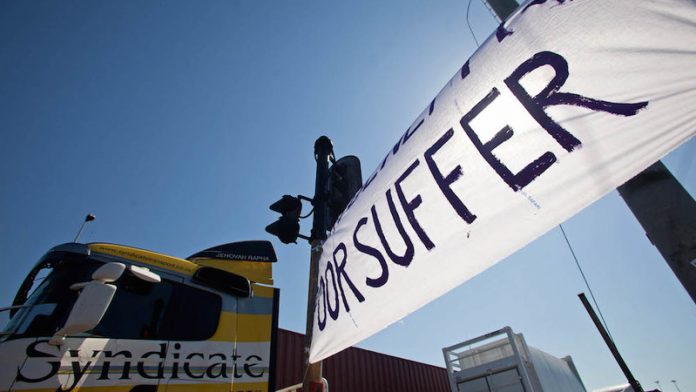 That Durban’s South Basin is among the most documented sites of corporate insouciance and yet continues without a decisive break, speaks to the limitations of journalism and protest in South Africa.

Journalism, at times, can appear to speak to itself, or largely speak to middle-class comforts and distance rather than people continuing to defy impossible death rates.

Besides two oil refineries (belonging to Engen, Shell and BP respectively) that have been an intimidating presence since 1954, the area is home to a Mondi paper factory as well as a web of other industries and chemical processing factories. Besides the eyesore of different-sized factories, these refineries stand, in the residents’ eyes, as “ships going nowhere”.

In 2000, newspaper-collected data analysed by public health specialist Duane Blaauw at the University of KwaZulu-Natal’s Nelson R Mandela School of Medicine found the rate of leukaemia among young children in Merebank, a suburb in the South Basin, to be 24 times higher than in the rest of the country.

Asthma was “strikingly high” and tonnes of nitric oxide, nitrogen dioxide, sulphur dioxide and benzene hovered in the air as a result of trucking volumes and industrial activities.

But rather than present a stack of blank facts, The Construction Cartel exhibition, which opens at GoetheonMain, Johannesburg, on August 4, seeks to unravel what the face of that bleak stat sheet looks like, using the highly fallible tools of said journalism to subvert their impotence.

Largely a photographic exhibition by online magazine The Con, The Con-struction Cartel focuses on the quieter moments as opposed to irate citizens toyi-toying and grief-stricken children on surgery room deathbeds.

“Yes, there was the forensic journalism which we actually did, then there was this transition from that space into one inhabited by the elite,” says Niren Tolsi, a cocurator of the exhibition with Durban Centre for Photography founder Peter McKenzie.

“Provoking them on their level in their own space was an important part of the project. To do that, we wanted something a bit more abstract so that it could appeal to their pretensions.”

For McKenzie, a self-confessed product of the struggle generation of photography, the approach of the project, which involved the Centre for Photography as an institution, rather than highlight the role of individuals, was to “find new visual languages that can speak eloquently, or with anger, to contemporary contexts today. We always talk about apartheid photography as the aesthetic of the fist in the air. And we cannot use that same aesthetic to talk about contemporary issues, because it is gone, there are other dynamics.”

Inside the gallery, the images have been curated in such a way as to embody the feeling of being in both the incessant hum of the South Basin’s truck route and in the deathly calm of people’s homes while the “ships going nowhere” ensnare the background.

A Truck Fuck, a series of images of trucks invoking the truck route from Clairwood to Wentworth, speaks to the collusion aspect of the exhibition and yields, along “pit-stops”, turmeric-coloured chrome powder seeping from underground.

Companies involved in the construction cartel were in some cases awarded contracts to clean up the mess of polluting companies. The Competition Commission uncovered more than than 300 public and private infrastructure projects worth R47-billion since its investigations began in 2009.

EsorFranki Construction, for example, paid Stefanutti & Bressan, a construction company involved in the cartel, a loser’s fee of R1-million in accordance with collusion on the Lanxess groundwater remediation project. For their corruption, EsorFranki paid the measly fine of R155 850.

Tolsi says, with the journalism aspect of the project, they sought to “challenge this notion that only black government has flaws and white capital is pristine. When we started the project it was a journalistic thing, then when Peter and the Durban Centre for Photography got involved it started shifting around because Lloyd Gedye [who was involved in the investigative reporting] and I are not photographers.”

The images in The Con-struction Cartel are evocative by what they seek not to suggest. The omnipresence of refinery chimney stacks in most of the neighbourhood shots seems to blur them into the background, whereas the detailed shots of religious paraphernalia yields uncanny symbolism about the sacredness of personal space and the profanity of mining the soul of private lives for profit.

“A lot of people talk about how the quiet moments are really the most important moments of history, like the rose growing in this heavily polluted area. We [the Durban Centre for Photography and The Con] share a kindredness around that,” says Tolsi, a freelance journalist.

For all its density, the first print edition of The Con, subtitled The Wisdom Portal and priced “the soul of your firstborn”, glows as an example of the appealing beauty of journalism. Tolsi admits that among its aesthetic qualities is that it was printed on newsprint – and it is text heavy “in an age where those in charge of newspapers tell us those who do read prefer banal drivel, listicles and cats”.

The Con-struction Cartel runs at GoetheonMain until August 29. It was supported by a Taco Kuiper grant, administered by Wits Journalism. The Taco Kuiper fund supports investigative journalism in the public interest