Printing money: Blade Nzimande’s relative is at the heart of a new UniZulu scandal 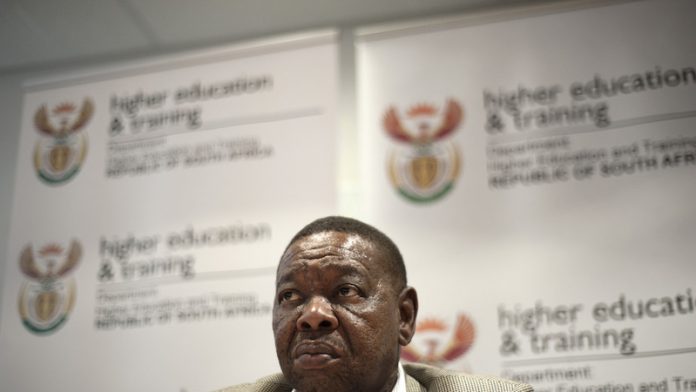 The University of Zululand has become mired in yet another controversy after staff questioned whether a multimillion-rand printing contract awarded to Muzi Ntombela, the brother-in-law (sibali) of Higher Education Minister Blade Nzimande, was still valid.

Staff are demanding to know why the university’s management did not put the contract out on open tender in January despite its coming to an end in December 2015.

According to the university’s supply chain management policy, any contract for more than R200 000 or that exceeds one year should be open to competitive bidding.

The deputy vice-chancellor for institutional support, Professor Neil Garrod, emailed staff members a notice on January 6 informing them that the campus print shop, which was previously run by Ntombela’s company, Process Litho, had been closed on December 31 last year.

Process Litho was initially awarded the printing contract in 2012 to provide specialised printing services such as digital, litho, silkscreen and security printing.

Then, on November 12 2013, the scope of that contract was extended for two years to include managing the printing centres and library printing at both the KwaDlangezwa and Richards Bay campuses at a monthly cost of R887 137.82.

Documents seen by the Mail & Guardian reveal that Process Litho was paid R5.3‑million in 2014 and R11.3‑million last year.

According to the minutes of a meeting of the special bid adjudication committee held on November 4 2013, “the contract cannot be regarded as automatically renewable at any stage of the contract”.

University employees say Garrod was rebuked for sending the email to say that no further work should be sent to Process Litho.

A staff member said that Garrod was also reprimanded by the vice-chancellor, Xoliswa Mtose, in February for suggesting that she wanted a hasty, closed-tender process for the printing contract.

The staffer said Process Litho made a presentation on printing solutions after being invited to do so by the university, and that it was not put out to open tender.

The staff member said that, in addition to the amounts that Process Litho charged the university, it also charged students for printing, copying and photostats.

“Regardless of whether the university printed 12‑million pages annually or not, they were still liable for the total cost. This is ridiculous.”

The same employee said that both Process Litho and Nashua provided a printing service on campus.

“It’s pretty obvious that the contract with Process Litho was not cancelled because the company belongs to Blade Nzimande’s brother-in-law,” the source alleged.

Referring to the prices Process Litho charged for printing pages, they said: “The real losers here are actually the students.”

Hlakaniphani Jamile, the deputy secretary of the National Education, Health and Allied Workers’ Union on campus, claimed that no tender had been advertised for the initial printing contract awarded to Process Litho in 2012.

“The union’s position is it needs to be looked into and the people who are responsible for that should be brought to book.”

He said that although the university had no policy that precluded relatives of people in the higher education ministry from being awarded contracts, he had his misgivings.

“One feels a little bit worried if there are relatives of people in [the] ministry of higher education who have financial interests here, because that would appear to have the impact of clouding the judgment of the minister when it comes to the affairs of the university.

“For instance, I don’t think he would be very comfortable with investigating the allegations that the contract was not properly awarded because that would hit closer [to] home.”

Jamile said Process Litho was also involved in printing the university’s examination papers, which was “a huge breach of security”.

“Their employees are not university employees and have access to all the examination question papers that are written here.”

The university’s director of communications and marketing, Gcina Nhleko, who was emailed a list of questions on Tuesday, said the university would respond during a press briefing scheduled for next week. “Please await an official invitation. We will respond to your inquiries in detail at that stage.”

Strauss Daly, a law firm representing Ntombela, stated that its client, as a service provider to the university, was not permitted to disclose certain matters in the course of replying to media inquiries “without the written consent of the university”.

The firm said that a response would be furnished if their client was given “written clearance” from the university or if he were to receive a court order directing him to respond.

“We record that a publication without following this process will certainly be prejudicial to our client.”

Nzimande’s spokesperson, Harold Maloka, said the minister did not get involved in the day-to-day running of universities because they were autonomous and he was not party to the contract.

‘There are Mechanisms in Place’, comprising text, poetry and visual analysis of Pamela Phatsimo Sunstrum’s practice, reveals how working together is a powerful philosophy
Read more
Coronavirus

We need a NSFAS that is run effectively and efficiently to serve poor and working class young people who want to change their lives through education.
Read more
Coronavirus

In April, UniZulu announced that it had negotiated zero-rated data with MTN, Telkom and Cell C in so its students could access teaching and learning on its online platform without incurring data costs
Read more
Advertising
Continue to the category
Politics