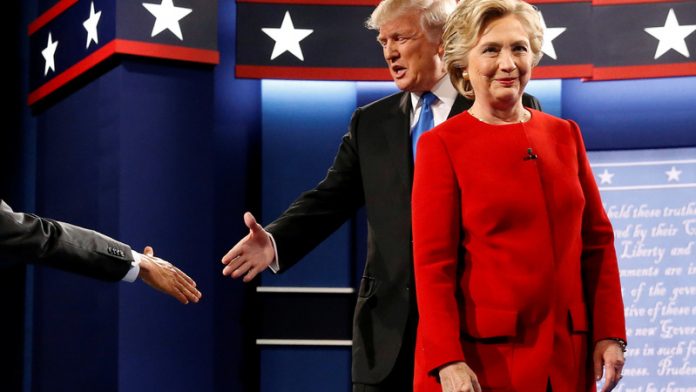 Democrat Hillary Clinton accused Republican Donald Trump of racism, sexism and tax avoidance on Monday, putting him on the defensive during a debate that a snap poll said boosted her White House chances.

Clinton was under pressure to perform well after a bout with pneumonia and a drop in opinion polls, but her long days of preparation appeared to pay off in her highly anticipated first 90-minute standoff with Trump.

Trump, a former reality TV star who eschewed a lot of debate practice, was strong early on but appeared to become repetitive and more undisciplined as the night wore on in front of a televised audience that could have reached upwards of a record 100-million people.

A CNN/ORC snap poll said 62% of respondents felt Clinton won and 27% believed Trump was the winner.

In signs that investors awarded the debate to Clinton also, Asian shares recovered from an early bout of nerves while the Mexican peso surged on Tuesday. Her chances in the November 8 election improved also on online betting markets.

Great debate
“You feel good tonight?” Clinton asked supporters after the event. “I sure do. We had a great debate.”

Trump, 70, declared himself the winner to reporters at the debate site, then opted against a visit to a local debate watch party that his staff had left open as a possibility.

The 68-year-old Clinton relentlessly sought to raise questions about her opponent’s temperament, business acumen and knowledge.

Trump used much of his time to argue the former first lady, US senator and secretary of state had achieved little in public life and wants to pursue policies begun by President Barack Obama that have failed to repair a shattered middle class, with jobs lost to outsourcing and over-regulation.

Trump suggested her disavowal of a trade deal with Asian countries was insincere. Her handling of a nuclear deal with Iran and Islamic State militancy were disasters, he argued.

In one of their more heated exchanges, Clinton accused Trump of promulgating a “racist lie” by suggesting Obama, the first US African-American president, was not born in the United States.

The president, who was born in Hawaii, released a long-form birth certificate in 2011 to put the issue to rest. Only this month did Trump say publicly that he believed Obama was US-born.

“He (Trump) has really started his political activity based on this racist lie that our first black president was not an American citizen. There was absolutely no evidence for it. But he persisted. He persisted year after year,” Clinton said.

“Nobody was pressing it, nobody was caring much about it … I was the one that got him to produce the birth certificate and I think I did a good job,” Trump said.

Tax returns
Trying to get under Trump’s skin and provoke a volcanic eruption, Clinton suggested Trump was refusing to release his tax returns to avoid showing Americans he paid next to nothing in federal taxes or that he is not as wealthy as he says he is.

“It must be something really important, even terrible, that he’s trying to hide,” she said.

Trump fought back, saying that as a businessman, paying low taxes was important.

“That makes me smart,” Trump said.

“I have a tremendous income,” he said at one point, adding that it was about time that someone running the country knew something about money.

Trump sniffed loudly at points – a campaign aide said the candidate had no cold – but largely contained himself. He said he would release his tax documents after a government audit.

But Clinton, the first woman to win the presidential nomination of a major US political party, seemed to pique Trump’s ire when she brought up Trump’s past insults about women.

“He loves beauty contests, supporting them and hanging around them and he called this one ‘Miss Piggy’ and then he called her ‘Miss Housekeeping,'” she said.

During the debate Trump darkly hinted at wanting to say something but stopped short. Afterwards he told reporters he had thought of raising the sex scandal involving Clinton’s husband, former President Bill Clinton, who was in the audience with their daughter Chelsea.

“I was going to say something extremely tough to Hillary and her family and I said I can’t do it. I just can’t do it. It’s inappropriate, it’s not nice,” he said.

Red and blue
Clinton wore a red pantsuit, and Trump wore a dark suit and a blue tie to the encounter. She called him Donald. He avoided his campaign trail name for her, “Crooked Hillary,” and instead called her Secretary Clinton for much of the debate before switching to her first name.

Toward the end of the debate, Trump said Clinton did not have the endurance to be president but avoided mentioning her bout this month with pneumonia.

Clinton retorted: “As soon as he travels to 112 countries and negotiates a peace deal, a ceasefire, a release of dissidents … or even spends 11 hours testifying in front of a congressional committee, he can talk to me about stamina.”

“I have a feeling I’m going to be blamed for everything,” Clinton said during one tough exchange.

“Why not?” retorted Trump.

The Mexican peso, dubbed the “Trump thermometer” because of its sensitivity to the US presidential campaign, climbed 2%. Trump has pledged to build a wall at the Mexican border to prevent illegal immigration. – Reuters