A bridge between cultures

About five years ago I attended a workshop on southern African music by Geoffrey Tracey (47) on his family’s smallholding in Krugersdorp. Geoff was obviously very knowledgeable on the topic. He likened the structure of the tunes he taught us to circles — each time a circle comes around, it’s slightly different. Those who are unfamiliar with African music often find it repetitive, he explained, because they cannot discern the subtle variations that make it so interesting for those who play, know and enjoy it.

“The workshop used the examples of Ugandan amadinda xylophone, Zimbabwean mbira dza vadzimu, Mozambican nyanga panpipes and other examples that come from the research and work of my father and grandfather, in order to demonstrate generalised fundamental African music principles that allow people unfamiliar with these principles to have an access point for their own understanding and subsequent participation,” explains Geoff.

After the workshop he took some of us around Saronde, as the family farm was called, and told us it was soon to be sold. Three generations of Traceys had lived there, and when it was finally sold in 2017 it felt to Geoff, who had grown up there, as if he had “lost a part of his own body”.

On the tour of the farm he showed us the rusty trailer that had belonged to his grandfather Hugh, which had been towed behind a truck on his numerous field trips to record the music that he loved. This was music of African cultural origin, being made by African-born citizens. Hugh managed to collect a substantial cross-section of secular/popular, religious/sacred and ethnic/modern music that was being made in southern, central and eastern Africa from 1929 through to the mid-1960s.

READ MORE: How Shangaan went electronic — and then global

I was familiar with the Traceys, as, at the time of the workshop, I lived with a musician who would play me samples from the music Hugh collected, dubbed The Sound of Africa and The Music of Africa. And I had studied in Grahamstown in the 1980s, where I saw Hugh’s son Andrew perform with the Andrew Tracey Steel Band at several events.

Swedish composer Ludwig Göransson recently used a selection of Hugh’s recordings to inspire his score for the film Black Panther, which won an Oscar for Best Original Score. He sourced these tunes from the International Library of African Music, the world’s largest repository of indigenous African music, which was established by Hugh nearly 70 years ago, and run by Andrew until 2005. 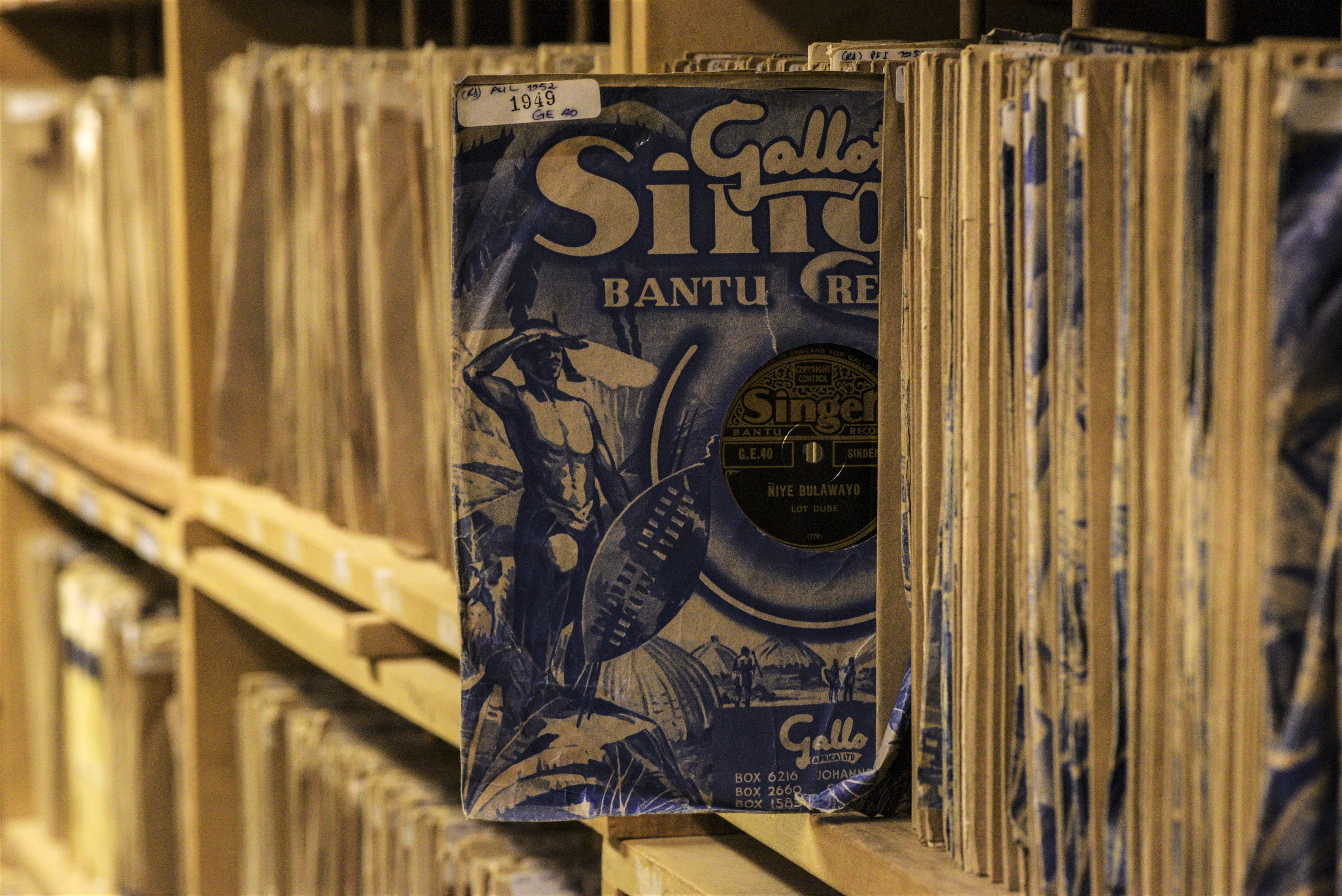 The library and Hugh’s other brainchild, African Musical Instruments — which manufactures instruments such as mbiras and marimbas —moved from Krugersdorp down to Grahamstown in 1978. The library is now part of Rhodes University, which co-ordinates its ethnomusicology programme.

There are striking parallels between the Tracey family’s work and that of the Lomax family in the United States. John Lomax was an ethnomusicologist who did numerous field recordings of chain gangs, blues, cowboy and folk music. John and his son Alan began recording in 1934, and, crossing the continent, amassed more than 10 000 recordings of vocal and instrumental music on aluminium and acetate discs for the Library of Congress. They helped to bring musicians such as Lead Belly, Woody Guthrie and Pete Seeger into the public eye. Alan’s son, and his son — both named John — are still prominent in the music industry.

Unlike the Lomaxes, the Traceys never obtained funding from their government in their quest to preserve the music of their continent. But they managed to raise money from sources such as Eric Gallo and the Ford Foundation, and the legacy of the Tracey family is that it has helped to create a present and future for an oral tradition that may otherwise have been lost or diluted by the influence of Western music and technology.

What was it like to grow up in such a family? “It was amazing,” says Geoffrey. “Music filled the home and musicians came around frequently. My father’s steel band was a big part of that. It was a platform to arrange and secure gigs with, all around the country. For 40 years it was a very popular thing for the public and for those who passed through the band. It was like a mini school of international folk music. A number of the old members are music researchers now.

“Every Sunday there was a rehearsal, and this brought together up to a dozen musicians for most of the afternoon, with a great, featured tea spread out indoors or on the lawn of the Krugersdorp farm.”

Geoffrey says he was blessed from a young age to be introduced “as if I were family” to some elite African musicians. Among these was Venancio Mbande of the Chopi xylophone culture of Mozambique, Ephat Mujuru, an mbira player and storyteller from Zimbabwe, and Adama Dramé, a master djembe player from Burkina Faso.

He was taken to mine dances in Rustenburg, to most southern African countries, and on a European tour with 30 Chopi orchestra players and dancers.

Geoffrey’s father Andrew was a patient and inspiring teacher who played music with him “from before I can remember”. 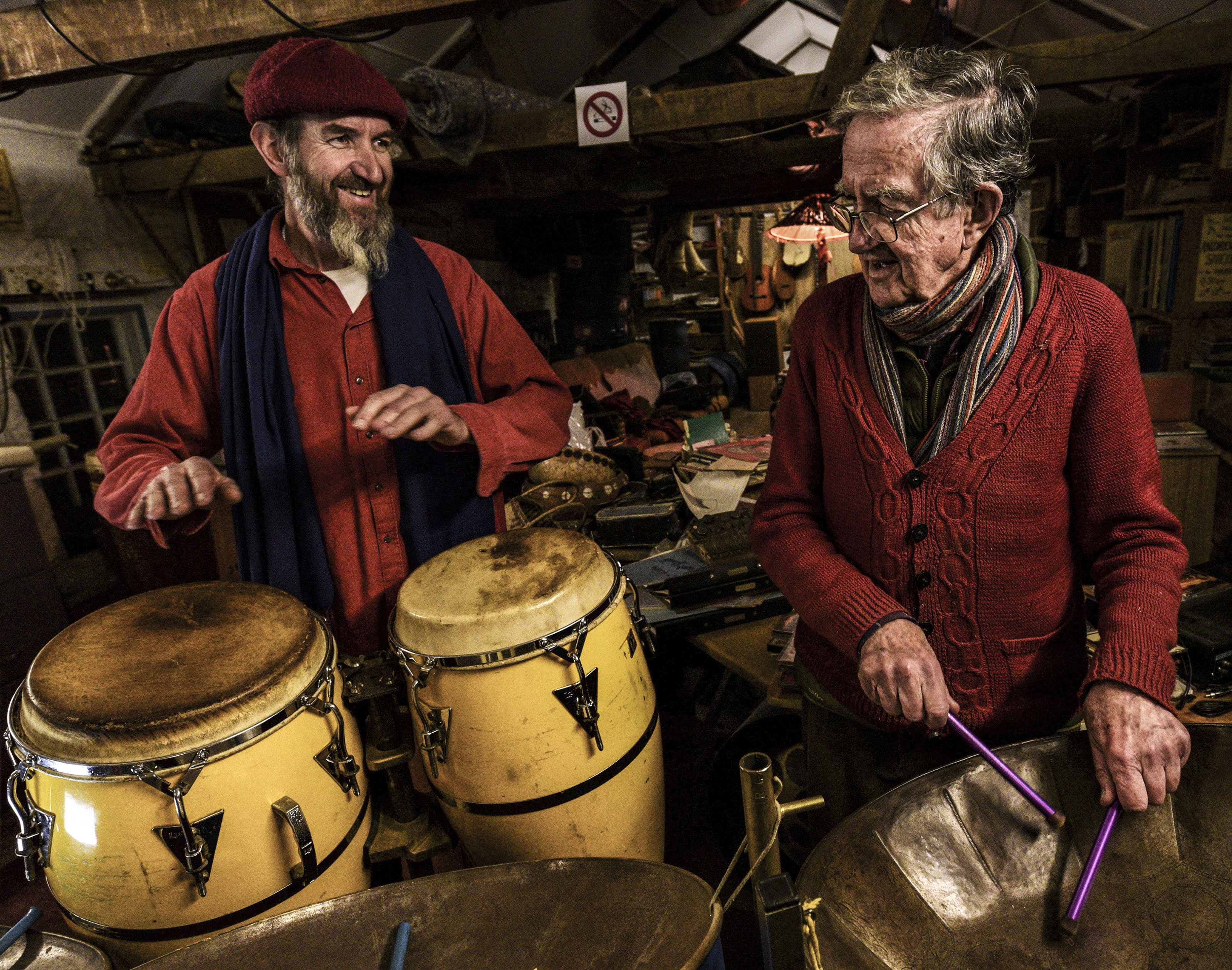 “When I was young dad used to play mbira in a simple way so I could hear the beat, and then play it in a more complex way so it was harder to hear where the beat was. He was training me to listen for the underlying dance beat, through which all the other parts are connected. He was training me to have presence and confidence when playing your part, because in African music sometimes it’s the way you play off the beat that’s important, and you can’t play off it if the feeling of where it is, is not strong and confident.”

Geoffrey started playing African instruments at the age of 16. He now plays Latin conga drums, the drum kit, trombone, violin and the uhadi single string bow. He has also devoted time to the Ugandan harp (ennanga), xylophone and pentatonic sets of horns. His favourite instrument is the mbira dza vadzimu or mbira huru, on which he learned “five big tunes” growing up.

“I enjoy developing slowly by not learning more repertoire, but by learning the repertoire that I already know more deeply — new ways to play, feel the rhythm, sing and accent.”

Geoffrey believes his work of ubungoma deepens the spiritual relationship his family has with Africa.

“One doesn’t choose to become a sangoma,” he says, “it’s a calling. Frequently it will show up as sickness. I got sick and was diagnosed with fibromyalgia (musculoskeletal pain accompanied by fatigue, sleep and memory and mood problems).”

His fibromyalgia hasn’t yet fully healed since he became a sangoma, but his relationship with his ailment has shifted — and he is still able to play music.

“I now see the pain as a kind of ancestors’ tool to carve me into the person I need to be, to be able to hold what I have been given. Pain is my guide, in a sense; I am respectful of it, for helping me listen to what I carry, which needs to be brought forward for healing,” says Geoffrey.

His initiation involved waking at 4am, cold water washing in the dark, taking medicines, steaming, ritualised dancing and singing and formalised greetings. Many menial chores filled the day: harvesting plants and preparing imithi, serving clients, cleaning the home and praying.

It took place in KwaZulu-Natal, where his grandfather had once lived and worked, so to train there “felt comfortable”. One of his names is Gogo Hugh, which helps to connect him to the spirit energy of his grandfather.

“Hugh is a great source of blessing and a stabilising, supportive energy in my life. He was a character, charismatic and filled with vigour and animation, and a natural storyteller. I only knew him until I was five years old when he passed from multiple strokes,” says Geoffrey.

“But he, and the sound of his voice, had already taken root in my being. His voice represented love, humour, fascination, and gentle authority. Grandpa Hugh is and was always in my heart.”

Geoff says that a sangoma is a public servant, in service to spirit. His grandfather’s purpose was also to serve, and preserve what he saw as the rich, transient and misunderstood oral culture of Africa — the colonials of his era had no interest in it.

“His codification and textbook project was essentially to create teaching materials for schools and universities from African examples. Various authors have now started to create teaching materials from the archival material and make it accessible. He did lecture tours internationally, and donated full catalogues of his collection to all the major American universities.

“He also developed the kalimba, a diatonic Western-tuned instrument, with a layout similar in principle to “traditional” African instruments, which encourages rhythmic pattern playing. So I see the kalimba as a cultural bridge. I, too, am a bridge between cultures.”

Vumacam’s eye in the sky solution

Deep listening will serve us better than building walls