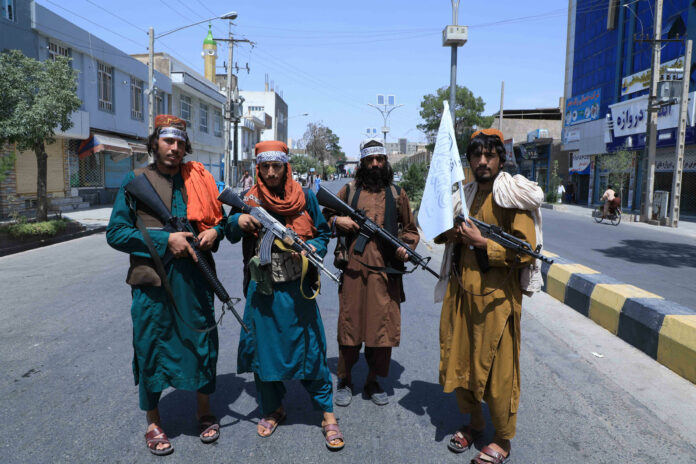 In a couple of days, it will have been 20 years since the 9/11 attacks on the US — and the subsequent invasion of Afghanistan by the Bush administration and its allies.

Two decades, trillions of dollars and thousands of deaths later the Americans have finally pulled out, leaving Afghanistan to the Taliban, who were, we are told, one of the reasons it invaded the country, despite having helped to fund them in the first place.

Comrade Carl and the boys must have been watching events unfold in Kabul on their brand-new 80-inch Samsungs with a mix of awe and jealousy — insurrectionist envy even — given that their own attempt to take over the state failed to gain traction and eventually ran out of steam.

The Ayikhali Brigade might have actually made it to the Union Buildings if they had taken a page out of the Taliban playbook and didn’t get distracted, spending three days hitting the ATMs and stocking up on free liquor, big screen TVs and Smeg fridges, rather than seizing the harbours, airports and the SABC.

It’s also been 532 days since president Cyril Ramaphosa first locked us down and — with the able assistance of Zweli Mkhize and Nkosazana Dlamini-Zuma — closed the pubs and nightclubs, banned the demon drink and gave the rest of us a bit of a taste of what life can be like under fundamentalist rule.

It’s hard to forget the glee with which some of the National Coronavirus Command Council (NCCC) members channelled their inner Taliban and told us that smoking, drinking and dancing were a thing of the past — kept us indoors for months while their comrades looted the Covid-19 relief fund made available to help to offset the effects of the lockdown on the economy.

It was apparent that the Misery Twins, and some of the other members of the NCCC, took a lot of personal pleasure in the whole rule-by-decree thing; in extending the tobacco and liquor bans based on their whim, rather than on science; turning us into some Calvinist police state for as long as they could get away with it — legal bills be damned.

Word has it that a family meeting with the head of state — well, more of a family lecture, or sermon, given that Ramaphosa does all the talking and the rest of us get to shut up and take notes as to what time we are being sent to bed every night — and a move to level-two lockdown regulations are on the cards.

An impending election will do that, especially now that the governing party appears to have dodged the bullet and is able to field all of its candidates after all, despite having missed the deadline last month.

It’s hard not to view the Electoral Commission of South Africa’s call in favour of reopening candidate registration as a bit of a homeground decision on its part, given that the ANC would have lost 35 municipalities before a single vote was cast if the commission hadn’t swung the governing party’s way.

Then again, the Constitutional Court judgment on the commission’s request to postpone the poll until next year was about as clear — and understandable — as Blade Nzimande’s last 75 annual addresses to the South African Communist Party national congress, which left the electoral commission plenty of room to wing it.

Either way, the poll is on, with the ANC contesting all 4 392 wards, provided that the Democratic Alliance doesn’t manage to overturn the decision on video-assisted refereeing at the Constitutional Court.

Provided that the ANC doesn’t miss the deadline for a second time and gift wrap 35 municipalities for the opposition again.

The party’s staff are still unpaid and on strike; Luthuli House is broke — and broken.

The comrades on the ground are still at one another’s throats over who gets the seats on the municipal gravy train for what could well be the last five years that the ANC will be driving it, with a couple of hundred disputes over councillor nominations still outstanding ahead of Sunday’s cut off for appeals.

I’d rather the ANC makes it over the line.

The idea of 35 municipalities being handed over to coalitions led by the DA even before voting could take place, is a laugh — but the outcome would have been rough: a whole lot of councils with municipal managers with bodybuilding certificates; chief financial officers with diplomas in nail technology.