Family history in red and white 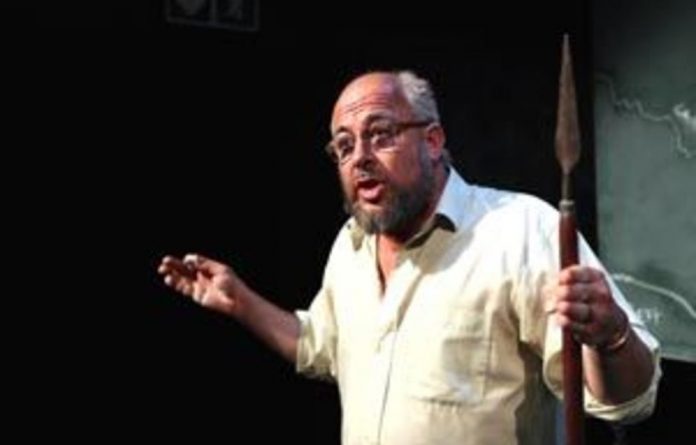 The Eastern Cape occupies a special place in the history of this country and, indeed, that of the subcontinent. It was in this region that the Xhosas, two centuries ago, first made contact with the British and Afrikaners, who were moving further inland from the Western Cape.

Grahamstown, once the largest town in the Cape Colony after Cape Town, comes alive in Death of a Colonialist, a drama about a family falling apart because of crime, disease and post-1994 racial dynamics.

Some of us have had inspirational teachers, not just the professional kind who put in a day’s work — I mean teachers who go about their work as if it’s a calling, ever so demonstrative and engaging in their outlandish antics to make a point.

Smith reminds me of those teachers. If it means taking off his shirt and daubing himself with red ochre to make a point about the “bloody Xhosas”, he will do it. He teaches history, the history of the Xhosas, in a way that brings the subject alive on the stage in vivid ways, showing a profound “colonialist” relationship to the African earth — a relationship bathed in blood spilled over many frontier wars.

The larger metaphor suggested by Smith’s antics is the shifting relationship of the white to the African terre. Could the white ever belong to Africa (Robert Mugabe, a few years back, pronounced that the white man is not indigenous to Africa) and how does the white manage or negotiate the competing older claims of the Xhosa, the Zulu and others?

These conundrums are at the back of his mind. What Smith is starkly aware of are moves at his school to sideline him, to tap into the professional pool of talent that does things conventionally without upsetting the system, but he hopes his passion and his fierce scholarly demeanour will win him approval.

But his family life is coming apart, too. His wife, Margaret, played by Shirley Johnston, ashen and with a sickly countenance, is counting down the days, succumbing to cancer.

Their two children are played by Ashleigh Harvey as Susan and Theo Landey as Jonathan. Jonathan is settled in Australia and trying to make a living in the fence business, and Susan, the victim of a horrific rape, is seeking sanctuary in a hoary Canada. The two regularly keep in touch with their mother, who stoically tells them she is on her way out, even though she doesn’t tell her husband.

Her family, naturally, panics at the news of Margaret’s terminal illness, which results in an unplanned family reunion and Smith is confronted with family secrets that have been easily kept out of his view as his head is plunged into the intrigues of the past.

The script by Greg Latter (writer of the films Forgiveness and Goodbye Bafana), the directing by Craig Freimond (director of the acclaimed comedy Jozi) and the larger-than-life stage presence of Bartlett bring to life this memorable character: big and vocally strident. He dominates the stage with his theatrical nature, his booming, schoolmasterly voice that reverberates to the rafters.

As we left the Barney Simon Theatre, I wondered what the play would be like if a lesser actor had played the role. That sentiment, of course, suggests inadequacies elsewhere.

A friend suggested to me that perhaps the problem, if we dare call it that, was the absence of Xhosas on stage in a production that hums quite a lot about the Xhosa’s initial encounter with whites and of their great rivalry that was consummated by about nine frontier wars.

Or was it that Bartlett’s commanding presence so overshadowed his fellow actors?

Whatever the reason, the play is a memorable production, a laudable achievement, posing important questions about the whites’ sense of identity and belonging through the seemingly clear prism of a Grahamstown family.