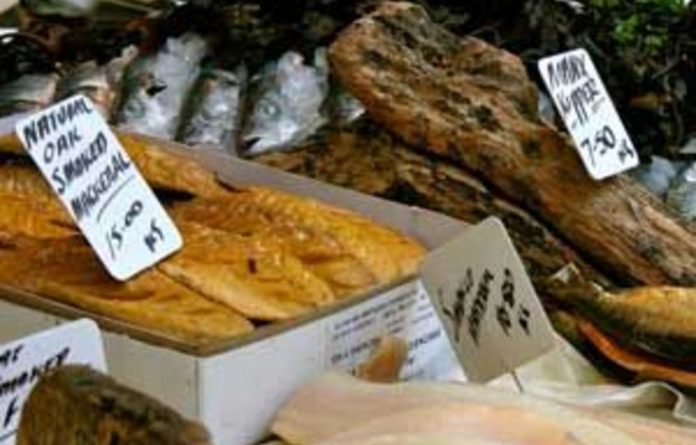 The makers of the third Harry Potter film used its narrow streets as the location for Diagon Alley, and there is certainly something faintly magical about Borough Market.

Nestled beneath the railway viaducts between London Bridge and St Margaret’s Church in Southwark, I do feel a little as if I’m stepping into a parallel world as I slip into London’s oldest and most famous market.

The name Borough Market first appears in records in 1276, when the traders operated on London Bridge. By 1755, they were causing such traffic congestion that the market was closed by order of parliament.

Reopening in its current site in 1756, it was better known as the territory of brigands and scallywags. The Marshalsea debtor’s prison was here and what with bear-baiting and the ‘Bishop of Winchester’s Geese’ — a notorious group of prostitutes — the area was infamous rather than illustrious.

After the Globe Theatre opened in the late nineties though, and the Tate Modern in 2000, the whole district transformed into a tourist trap, and the market speedily moved from wholesale business to a hipster hotspot. Today, the narrow maze of over 130 artisan bakers, cheese-makers, butchers, and fishmongers, absolutely buzzes on Thursdays, Fridays and Saturdays when the market is on.

130 is a lot of stalls, but I intend to sample as much as I possibly can. Before we head into the market proper, we stop at the Monmouth Coffee Company, for my companions to start their engines with coffee.

“I’m so sorry! We don’t serve hot chocolate, only coffee!” The waitress tells me when I order. She does look very sorry, devastated, in fact — in the way that only the British, intent on not offending, can. I take it as a good sign, myself. I may not be a coffee fan, but I’m always happy to discover an establishment that focuses on what they’re really good at. Besides, I’m fairly confident I’ll be able to find an alternate source of non-essential calories inside!

Around the world in 80 bites
We start in what appears to be the cheese district; and nibble on mouse-sized tasters from at least five different dairies. There is sublime Welsh Caerphilly cheese, made using an original hand-turned press, Ubriaco (‘Drunk’) cheese from Veneto in Italy, infused with wine, and Fabien Joly and Florent Gacon’s Comte, which has me wondering how many pairs of trousers I’ll have to throw out in order to smuggle an entire wheel home in my luggage.

From there, we nibble on fat, green olives from Borough Olives, and salty, Turkish Gemlik olives, from Taste of Turkey. Then there is Mexican Chipotle salsa to taste, and pork pies from a family that has been making them since 1853. To maintain stamina, I slurp down a tart 100% fresh fruit smoothie, from the The Natural Smoothie company.

We stand watching Kaposein, the cheese man, scraping melted cheese over potatoes and gherkins for his raclettes for an extended period of time — there is something terribly therapeutic about watching cheese melt! Eventually though, I commit to a fairly fantastic pita dripping with tzatziki and felafels from the Middle Eastern stall, before going off in search of dessert.

Gooey and delicious
The array of baked goods is a little bit alarming. There may not be any Bertie Bott’s Every Flavoured Beans, but there are sea-salted caramels and chocolate pearls from Irish chocolatier, Gerard Coleman and shortbread owls and gingerbread men from Cinnamon Tree Bakery. Ion Patisserie sells three varieties of cheesecake — raspberry and white chocolate, caramelised cheesecake and toffee and pecan.

Eventually though, I settle for one of their life-altering chocolate brownies; gooey and delicious. Somewhere along the line (I think perhaps before the felafels), we also devour fat, juicy strawberries, with cream. It is English summer, after all.

Prices at Borough are a little steep. My wallet is certainly a little lighter than when I arrived (though I think it’s safe to say it’s the only thing that’s lighter!) but it’s been worth it. Daniel Radcliffe may not have been anywhere in sight, but its been a magical morning.