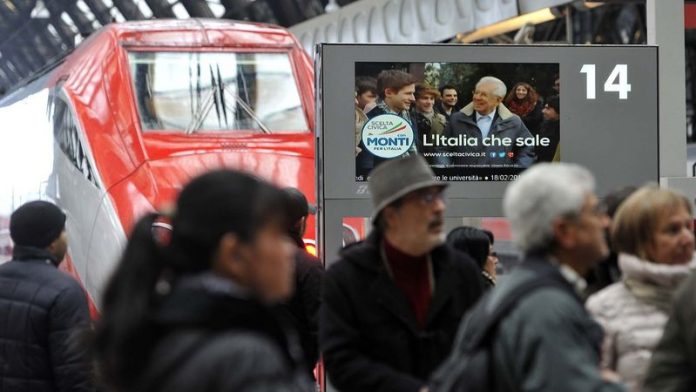 Three years of German-led austerity and budget cuts aimed at saving the euro and retooling the European economy was this week facing one of its biggest challenges – Italian voters rejected the spending cuts and tax rises and opened up a stark new fissure in European politics.

The governing stalemate in Rome and the vote in the general election – by a factor of three to two – against the austerity policies pursued by Italy's humiliated caretaker prime minister, Mario Monti, means that the spending cuts and tax rises dictated by the eurozone will grind to a halt, risking a re-eruption of the euro crisis after six months of relative stability.

Fears that the deadlock will lengthen Italy's nearly two-year recession and spill over into the rest of the eurozone hit markets across Europe. The Italian banking sector fell 7% in value, dragging the main MIB stock market index 4% lower. The market turmoil in Milan spread to Germany, France and the United Kingdom, with domestic banks among the biggest fallers.

The cliffhanger vote saw the maverick comedian Beppe Grillo's Five Star movement take almost one in four of the votes and the political revival of the ex-prime minister Silvio Berlusconi. The narrow victor, Pier Luigi Bersani, on the centre left, claimed the mantle of the premiership, although it is unclear whether he can form a government.

Despite the withering popular verdict on cuts and taxes, Brussels and Berlin insisted the austerity programme had to be continued in Italy. France and others seized on the outcome for their own purposes, arguing for a relaxation of spending cuts and greater emphasis on policies to boost growth and job creation.

Bersani moved to try to cobble a government together by wooing the upstart Grillo with tentative talk of a reformist leftist coalition. Looking weary, Bersani said it was time for the Five Star movement to do more than just demand a clean sweep of Italy's established political order.

Law by law, reform by reform
"Up to now they have been saying, 'All go home'. But now they are here too. So either they go home as well, or they say what they want to do for their country and their children."

Earlier, Grillo said his followers in Parliament would not join a coalition but would consider proposals "law by law, reform by reform".

Bersani said that, because his four-party alliance had won an outright majority in the lower house of the Italian Parliament and more seats than any other grouping in the Senate, it had a responsibility to suggest ways in which Italy could be governed, despite the deadlock in the upper house.

Shunning the idea of a grand coalition with Berlusconi and the right, he proposed a government committed to a five-point plan for sweeping reform of Italy's political parties and institutions.

The north-south split in Europe opened up by the election presages clashes between eurozone governments, likely to surface at a European Union summit next month amid calls for a shift away from the harsh regime prescribed and driven through by Berlin in recent years as the price of bailing out insolvent eurozone periphery countries.

The Italian stalemate comes at a time of tough negotiations over a bailout for Cyprus (which is being resisted by Germany), worries about the French economy, an unresolved debt crisis in Spain, and British Prime Minister David Cameron's decision to throw Britain's future in Europe into question, making EU politics unusually volatile.

"Italy plays a central role in successfully overcoming Europe's debt crisis," Guido Westerwelle, the German foreign minister, said. "So we assume that the policy of fiscal consolidation and reform will be consistently followed by a new government."

Eurozone calm
Angela Merkel, bidding for a third term as German chancellor in September, has been banking on a period of eurozone calm in the run-up to her election but Italian voters have wrecked that calculation.

Jeroen Dijsselbloem, the Dutch finance minister who was recently made head of the political committee that runs the euro, said Monti's policies had to be continued. "They are crucial for the entire eurozone."

The European Commission echoed the calls to stick with the austerity medicine. Italy has the highest national debt level in the eurozone after Greece, although its budget deficit is in better shape than that of many others, including France's and the Netherlands'.

But Paris led the chorus for a policy shift. French government ministers, including Pierre Moscovici, the finance minister, in remarks directed at Berlin, demanded a change of course.

Spain waited anxiously to see what impact the Italian leap in the dark would have on its debt crisis. "This is a jump to nowhere that does not bode well either for Italy or for Europe," said Jose-Manuel Garcia-Margallo, the Spanish finance minister, adding that he was "extremely concerned" about the effect on Spain's borrowing costs.

Both Berlusconi and Grillo have been harshly critical of the Germans, decried Monti's austerity packages and raised questions about whether Italy, the eurozone's third biggest economy, should remain in the single currency. Grillo has called for a referendum on the matter.

Berlusconi rounded on the Germans on Tuesday, declaring that the "spread" – the difference between how much Italy and Germany pay to borrow on the bond markets – had been "invented" two years ago. This was code for saying that Berlin and Frankfurt – the German government and the European Central Bank – had conspired to push up the cost of Italian borrowing in 2011 to topple Berlusconi and bring in Monti, the technocratic darling of the eurozone elite. – © Guardian News & Media 2013