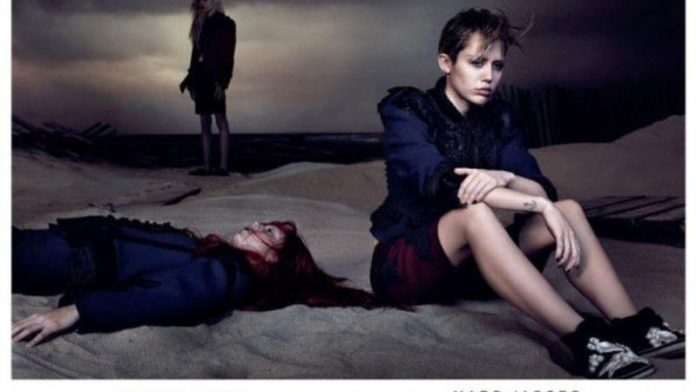 For once it's not the image of Miley Cyrus herself that is controversial. It's the woman lying next to her. In a new advertising campaign for Marc Jacobs, Miley and two female models pose on a moonlit beach, Miley sitting up, staring moodily into the middle distance, a woman standing behind her, while another lies on the sand. This model isn't reclining happily, or curled up asleep; she is flat on her back, hair partially covering her face, with the stiff, sightless demeanour of a body in the morgue. A beautifully dressed one, of course.

This ad campaign was released a day after the latest cover of US magazine Entertainment Weekly, which shows the two stars of upcoming film Gone Girl lying on a gurney. Ben Affleck is fully dressed and alert, curled awkwardly around Rosamund Pike, who is in a bra and slip, pale, wide-eyed with surprise, very much dead. A tag is tied carefully around her toe.

This isn't the first time dead women have been used in fashion or entertainment, of course. Over the years female corpses, especially beautiful female corpses, have become a staple of fashion shoots, advertising campaigns and TV shows – with sexual and fatal violence against women a favourite of TV programmes looking to boost a waning audience or build a new one.

Last year Vice magazine decided to illustrate their Women in Fiction issue with a fashion shoot depicting a range of well-known writers in the throes of killing themselves, or trying to: Sylvia Plath kneeling in front of an oven; Virginia Woolf standing in a stream, clutching a large stone; Dorothy Parker bleeding heavily into a sink. The fashion credits were included in full, down to the pair of tights used as a noose.

A 2006 Jimmy Choo ad showed a woman apparently passed out in a car boot, a man in dark glasses sitting beside her, brandishing a spade. In 2007 W magazine ran a fashion story featuring model Doutzen Kroes that ticked every box of objectification – multiple images of her seemingly passed out, semi-naked; one in which her lifeless hand held a teddy bear.

Not dead enough
That same year, America's Next Top Model illustrated this trend with an episode in which the contestants had to pose as if they'd just been killed. This prompted surreal comments from the judges. One woman, posed as if she'd just been brutally stabbed, was criticised for not looking dead enough. Another, posed as if she had fallen from a tall building, was told "death becomes you, young lady". Still another, covered in deep bruises at the bottom of a flight of stairs, was told: "the look on your face is just extraordinary. Very beautiful and dead." The show could hardly have gone further in illustrating fashion's fetishisation of the female corpse.

This obsession with death isn't so surprising, when you consider it as the obvious and ultimate end point of a spectrum in which women's passivity and silence is sexualised, stylised and highly saleable. Over the past few years, there have been a number of brilliant projects that have shown the eye-popping strangeness of how women are posed for the camera, contorted into positions which make them look simultaneously ridiculous, weak, sexually available and highly vulnerable.

In 2011, for instance, Spanish artist Yolanda Domínguez created Poses, a project in which ordinary women reproduced model poses in everyday settings. One reclined awkwardly in a flower bed; another stood on the street, legs apart, bent forward, sucking her fingers; another posed, hip cocked, a clutch bag held dramatically to her forehead. People all around them gawped and did double takes.

Last year, a Swedish project showed the difference between the way men and women are posed in the notoriously creepy American Apparel ads, with a man gamely copying some of the female poses favoured by the company. Suddenly the incredible weirdness of a woman crouched on all fours, naked from the waist down, back arched to show off a denim shirt was completely clear.

A similarly effective gender swap was carried out by cartoonist Kevin Bolk, who decided to transform an Avengers poster so that all the men were posed as the one female character, played by Scarlett Johansson, had been on the genuine poster. The male characters immediately went from looking active, engaged and ready to defend themselves to being little more than display vehicles for their own buttocks.

What do consumers want?
Do people actually want these images? Do they want violence against women to be sexualised? There are some strong signs that they don't, from all the women who speak out against these images (Vice magazine ended up apologising and removing their fashion spread from the web as a result), to the news item that showed that films that pass the Bechdel test – which offer at least two female characters, who have a conversation, about something other than a man – outperform their counterparts at the box office. Last year, of the 50 highest-grossing films in the US, those that passed the Bechdel test earned $176-million at the box office, while those that didn't averaged $116-million.

Still, there's a reason these images proliferate. If the sexualised stereotype of a woman in our culture is passive and vulnerable, the advertising industry has worked out that, taken to its logical conclusion, there is nothing more alluring than a dead girl. – Guardian News & Media 2014

Reviving our industry to its former glory is possible. We have the infrastructure, talent, and a population that is eager to work. Now we just need consumer buy-in.
Read more
Friday

How we choose to dress is an instrument to communicate personal, race, class, gender and identity politics, as discussed in this extract from ‘Born to Kwaito’
Read more
Opinion

In a world defined by gendered violence, what can we do differently?
Read more
Friday

Many Ugandans find Stella Nyanzi’s mode of protest, including vulgar insults and stripping to make a point, unsettling. But her challenge to the country’s patriarchy could bring much-needed reform
Read more
Advertising