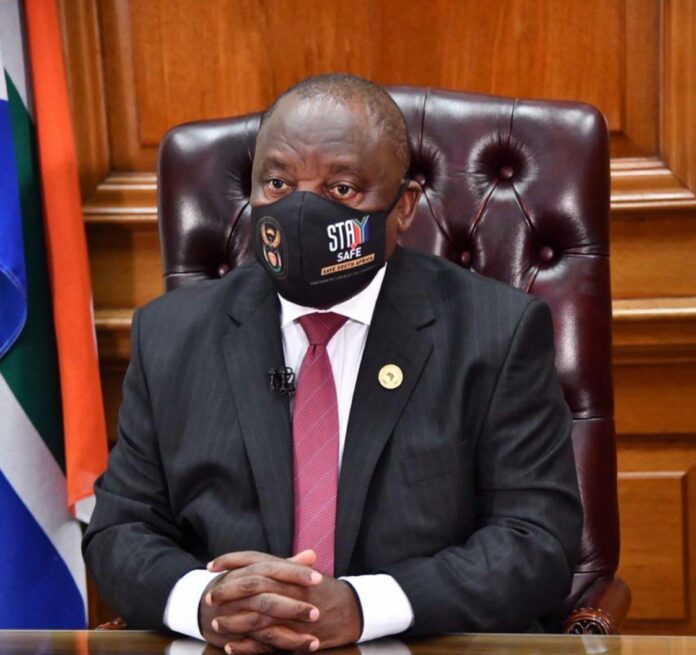 President Cyril Ramaphosa has announced the closure of public schools for four weeks.

Ramaphosa said schools would close from July 27 and reopen on August 24. He, however, specified that grade 12 learners and teachers would return to class on August 3, meaning they would take a one-week break. Grade seven learners would have a two-week break and return to school on August 10.

Ramaphosa  added that specific arrangements would be made for special education needs schools.

The president said the decision to close schools was “difficult” and that it was hard to find a consensus.

He said the decision was taken after growing calls for schools to be closed because of the rise in infections. He said, in the past few days, Basic Education Minister Angie Motshekga had met with stakeholders, including teachers unions, school governing bodies and civil society, as well as the Council of Education Ministers, to discuss the matter of schools.

“It is necessary to report it was difficult to find consensus on the best approach, just as there are differing views [from] national and international experts on how schools should be reopened.”

He, however, said everyone agreed that learners’ health and academic and social development is the most important.

Ramaphosa added that the cabinet had arrived at the decision to close schools against the backdrop of advice from the World Health Organisation that the best and safest way to reopen schools is in the context of low community transmission.

Last week, teachers unions called for the immediate closure of schools until after the peak of Covid-19 in the country. The South African Democratic Teachers Union (Sadtu) said one of the reasons the union was calling for schools to be suspended was because it believes there has not been effective teaching and learning since the first grades returned in June. He said this was because of schools closing when they have positive cases, as well as high levels of absenteeism from learners whose parents have decided to keep them at home.

The National Professional Teachers’ Organisation of South Africa said the decision to call for the closure of schools was, in part, influenced by reflecting on the changing science in terms of the various guidelines, as well as the deteriorating mental health of teachers.

The five teachers unions represented in the Education Labour Council met Motshekga last week after their calls for school closure. They met her again yesterday evening after a cabinet meeting.

In his address, Ramaphosa said the academic year would be extended beyond 2020, and that Motshekga would provide details on the management of the remainder of the school year.

“We have taken a deliberate cautious approach to keep schools closed during a period during a period when the country is expected to experience it is greatest increase in infection,” he said “I am aware that this arrangement will disappoint many learners who want to be back at school and may cause inconvenience and difficulty for many families who need to make alternative child care arrangements, we ask you to do this because we believe it is important to ensure that schools do not become sites of transmission at a time when infections are rising fast.”

However, even with schools being closed, the President said the National School Nutrition Programme would continue and that learners who qualify for the programme or their parents will continue to collect food from the schools.

Last week, the high court in Pretoria granted an order that the department of basic of education needs to roll out the programme to learners who are eligible, whether they are back at school or not. This is after advocacy group Equal Education had taken the department to court to force it to feed all eligible learners —even those who had yet to return to school.

Fifth in the world

In detailing the current infection rate, the president said South Africa now has 408 052 confirmed cases — the fifth-highest number of confirmed cases in the world, and half of all the cases on the continent.

The president said more than 6 000 people have died. This still represents a much lower fatality rate than other countries with such high levels of infection.

Since the president’s last address 11 days ago, more than 130 000 cases have been recorded.

Wednesday saw the highest number of deaths reported in a 24-hour cycle, with 572 deaths.

The biggest surge came from the Eastern Cape, which recorded 400 deaths. It was later clarified that these were deaths that had been recorded previously, but the data had not been published.

The national government has been put under pressure to place the provincial health department under administration so that the national health department can take over and respond to the Covid-19 crisis in the Eastern Cape. The province has been plagued with reports of a health system that is struggling and ill-prepared to cope with the increasing number of patients requiring hospitalisation.

But Health Minister Zweli Mkhize has been at pains to stress that the problems in the Eastern Cape existed long before the coronavirus reached South African shores.

“The coronavirus storm has arrived as we said it would. Provinces of the Eastern Cape Gauteng, Kwazulu-Natal are now experiencing a rapid rise in infections,” Ramaphosa said.

Ramaphosa noted a silver lining among the Covid clouds in that the Western Cape — once the epicentre of the pandemic in South Africa — appears to have reached its plateau of  infections.

By Thursday, the province recorded 87 474 cases in total, with only 11 991of them currently active.

“It may be too early to tell, [but] the developments in the Western Cape may have passed the peak of infections. However, we need to remain cautions,” Ramaphosa said.

Ramaphosa also announced the creation of a multi-agency task team to investigate and prosecute cases of alleged corruption, fraud and maladministration relating to Covid-relief efforts.

“I have signed a proclamation instructing the Special Investigating Unit (SIU) to immediately investigate any unlawful and improper procurement of any goods, works and services  during or related to the national state of disaster in any state institution.”

The president said 36 cases are already at various stages of investigation and prosecution.

“Those who are responsible for wrongdoing should be prosecuted, and all money stolen be recovered,” Ramaphosa promised.

The government has set aside R500-billion in a Covid-19 support package to assist businesses, workers, unemployed people and families in need. This money comes from the reprioritisation of departmental budgets, and from borrowing from development banks. There are also still ongoing negotiations with the International Monetary Fund, the president said.

“From the outset of the response we have been quite clear there should be no scope for corruption. Corruption puts lives at risk, particularly during this time,” Ramaphosa said.

More than 800 companies are also being investigated by the Competition Commission for excessive pricing, with fines of more than R16-million already issued.

“The success of our fight against corruption depends on the participation of all citizens and all parts of society … We need to safeguard our precious resources to overcome this disease,” Ramaphosa said.