Curating with, as opposed to on behalf of, is an approach Dr Thembinkosi Goniwe has been grappling with for the past eight years in relation to the late artist David Koloane.

That is why, in conversation, one gets the palpable sense that the staging of the two shows — A Resilient Visionary: Poetic Expressions of David Koloane (at the Standard Bank Gallery) and David Koloane: Chronicles of a Resilient Visionary (at the Wits Art Museum) —  is more of a bittersweet moment than it is a personal triumph for the curator.

The artist’s death at the age of 81, a mere 28 days after the June opening of A Resilient Visionary (at Iziko National Museum in Cape Town), doubtlessly impeded on the fullness of the curatorial vision Goniwe and Koloane had been executing behind the scenes. 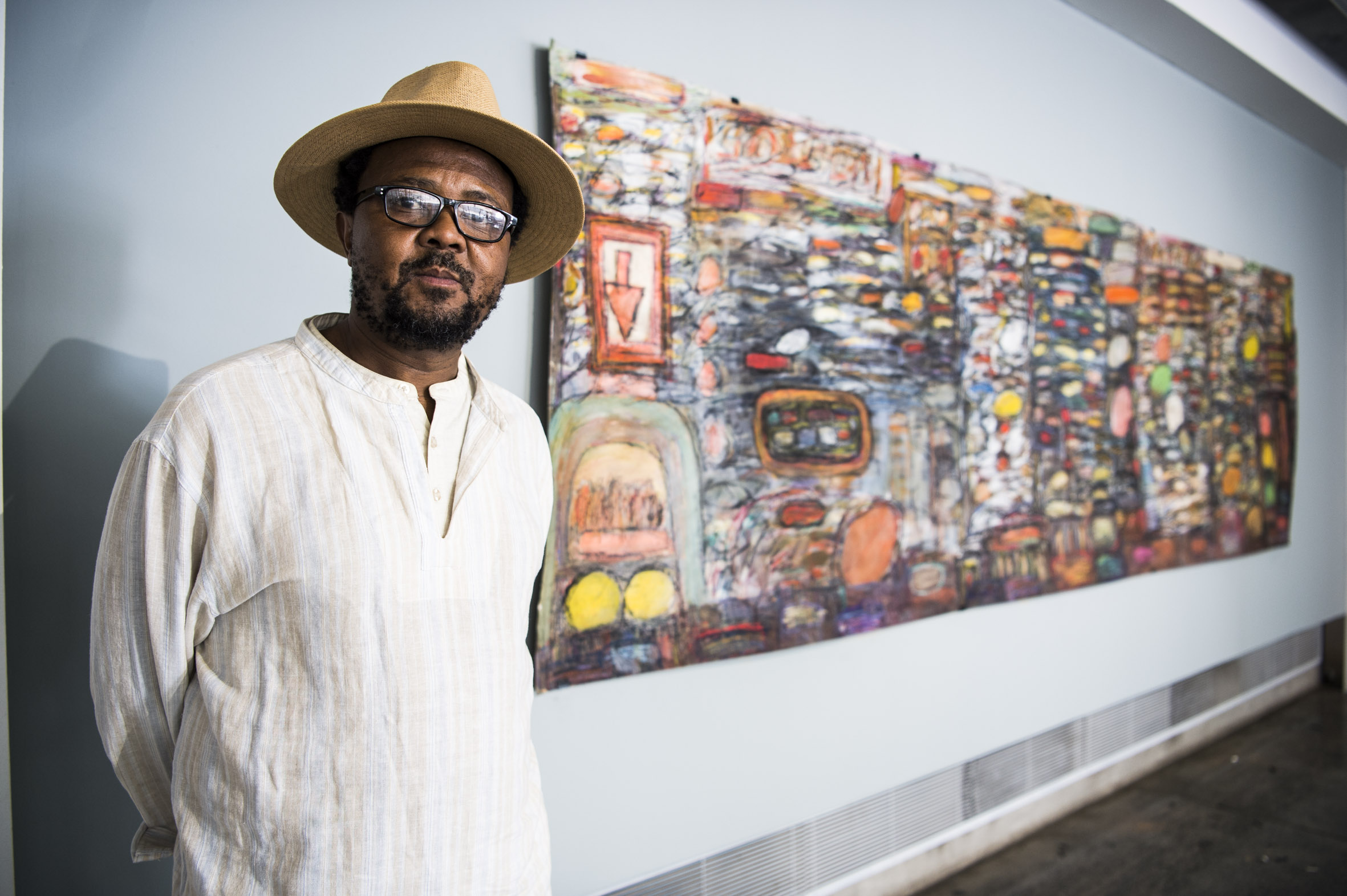 Dr Thembinkosi Goniwe has been working on co-curating with David Koloane for the past eight years. (Delwyn Verasamy)

So, although the concurrent shows represent not only the creative legacy of Koloane by respectively foregrounding his work and his persona, they also represent the curator’s attempts at soldiering on in the wake of the towering Koloane’s demise.

As a tandem, the shows actively seek to expand the framing of Koloane which often stops at the level of mentor and activist, says Goniwe, embarking on a deeper appraisal from two almost oppositional approaches.

At the Standard Bank Gallery, Goniwe presents, in a thematic scheme unfolding over two floors, an artist who had mastered, or was at least conversant with many forms, namely painting, assemblage, drawing, printmaking and even animation. At Wits, again centering theme, Goniwe reprises the man’s artistic preoccupations, balancing these out with blown-up photographic prints, personal mementos and interviews.

READ MORE: Why David Koloane could not be taught

Because of time limitations and attendant financial constraints, what the two shows do not present us with is a definitive retrospective, with Goniwe preferring the term “survey”, as an apt description of the spread of works. Whereas we may understand survey in particular ways, with other definitions seeming to suggest a cursory approach, Goniwe, I suspect, uses the term to mean “to examine and record an area and its features so as to construct a map, plan or description”. 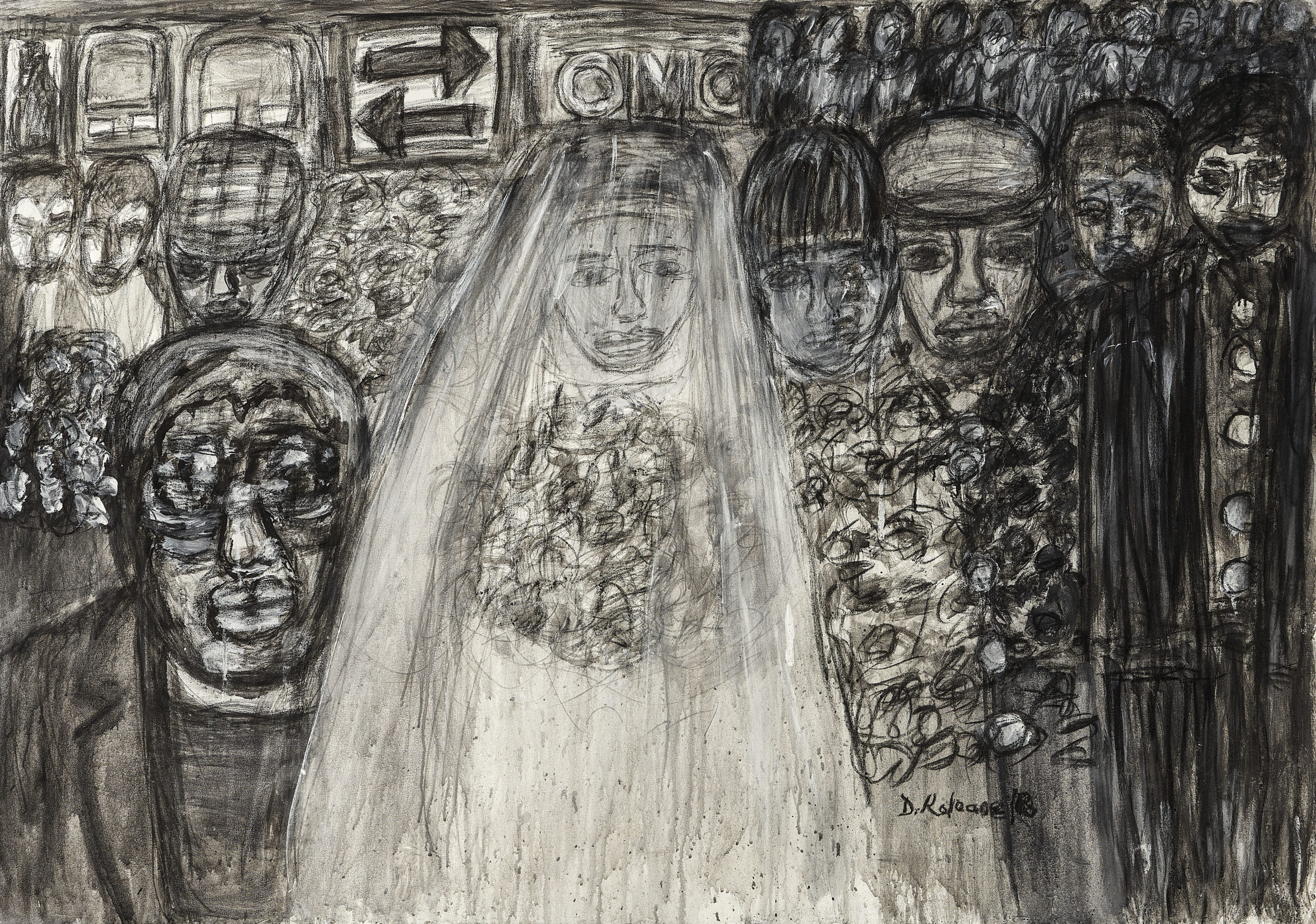 Procession is one of the works being used to express the ‘visionary resilience’ of David Koloane and his use of various media. (David Koloane)

Central to the premise of the two exhibitions has been the curator’s invitation to gaze deliberately, unencumbered by chronology and the burden of completeness so that we may understand Koloane with new depth.

The exhibitions also portend a flurry of academic activity around the man, with a catalogue of essays foregrounding the aesthetic aspects of his work and the discursive tributaries they set in motion, still to come.

READ MORE: Black Art: Its place in the sun

Perhaps hinting at the co-curatorial ethos that drove the staging of the show, about 60% of the works at the Standard Bank are from Koloane’s private collection (with many of these coming from the Goodman Gallery), and the rest being sourced from Johannesburg Art Gallery, the Durban Art Gallery and a few individual owners. 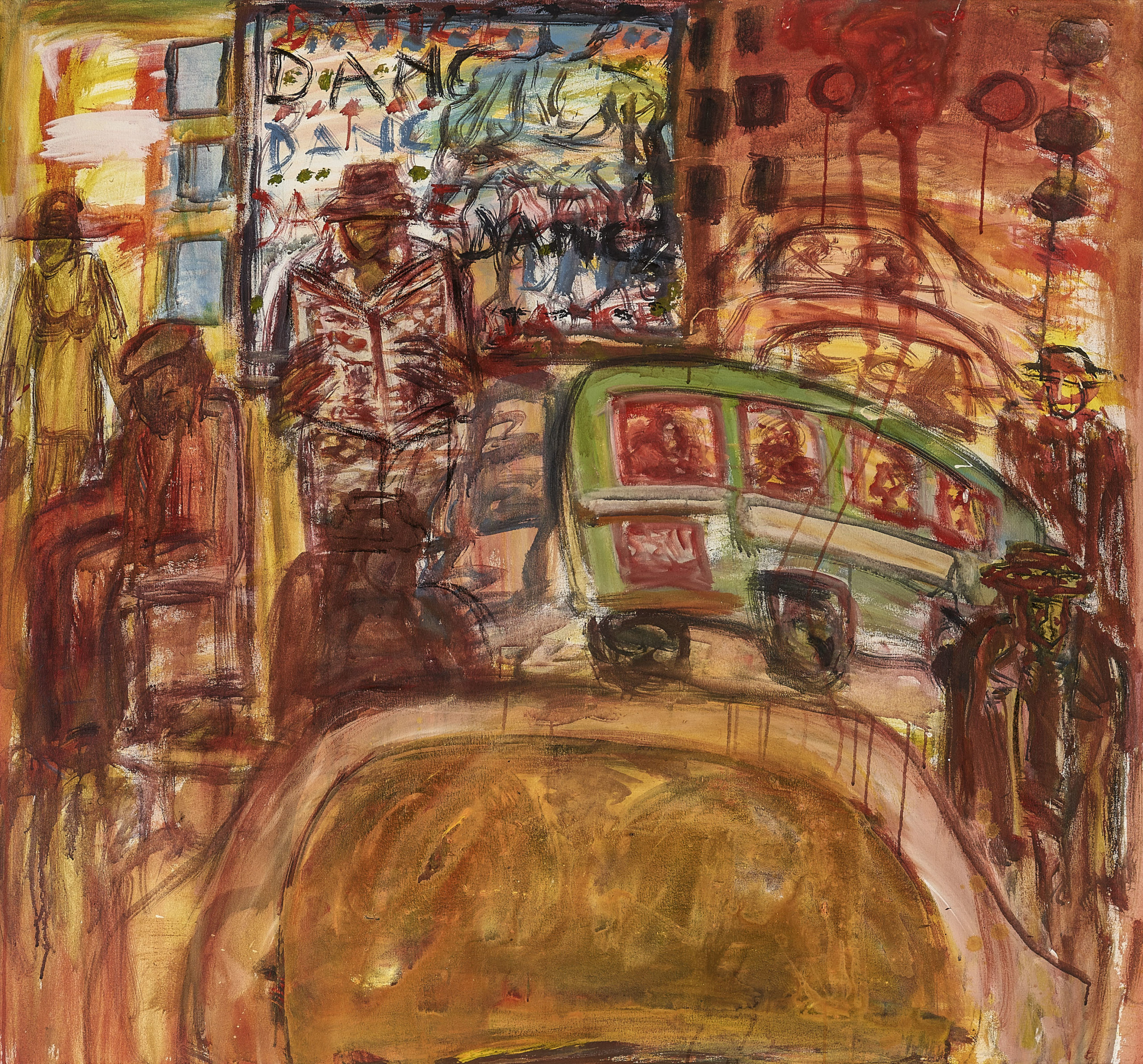 Rhythm (Acrylic on canvas) is among the works on show at the Standard Bank Gallery. (David Koloane)

The predominant themes (Johannesburg nightlife and its attendant characters, the symbolism of dogs, birds, portraits of musicians, jazz and the crowded, stacked cityscapes) are unsurprising if one is not encountering Koloane for the first time. But the variations in scale, form, mode and the novelty of some of the works have the effect of intimacy, as if one was in the artist’s studio in conversation or observing him work.

There is an intense sense of this in an alcove near the Standard Bank Gallery’s entrance, where Koloane’s meditations on birds are captured in series as small-scale mixed media works experimenting with form. There are charcoal and crayon monochrome drawings with dense surfaces and frantic lines. There are linocuts with jagged white lines that more or less decontextualise the birds’ habitats. There are dark etchings in pen and touches of water colour that render the birds almost ghoulish. These are placed in close proximity to Koloane’s sketches at foot level, encased in glass, with black and white photographs against the walls at eye level. 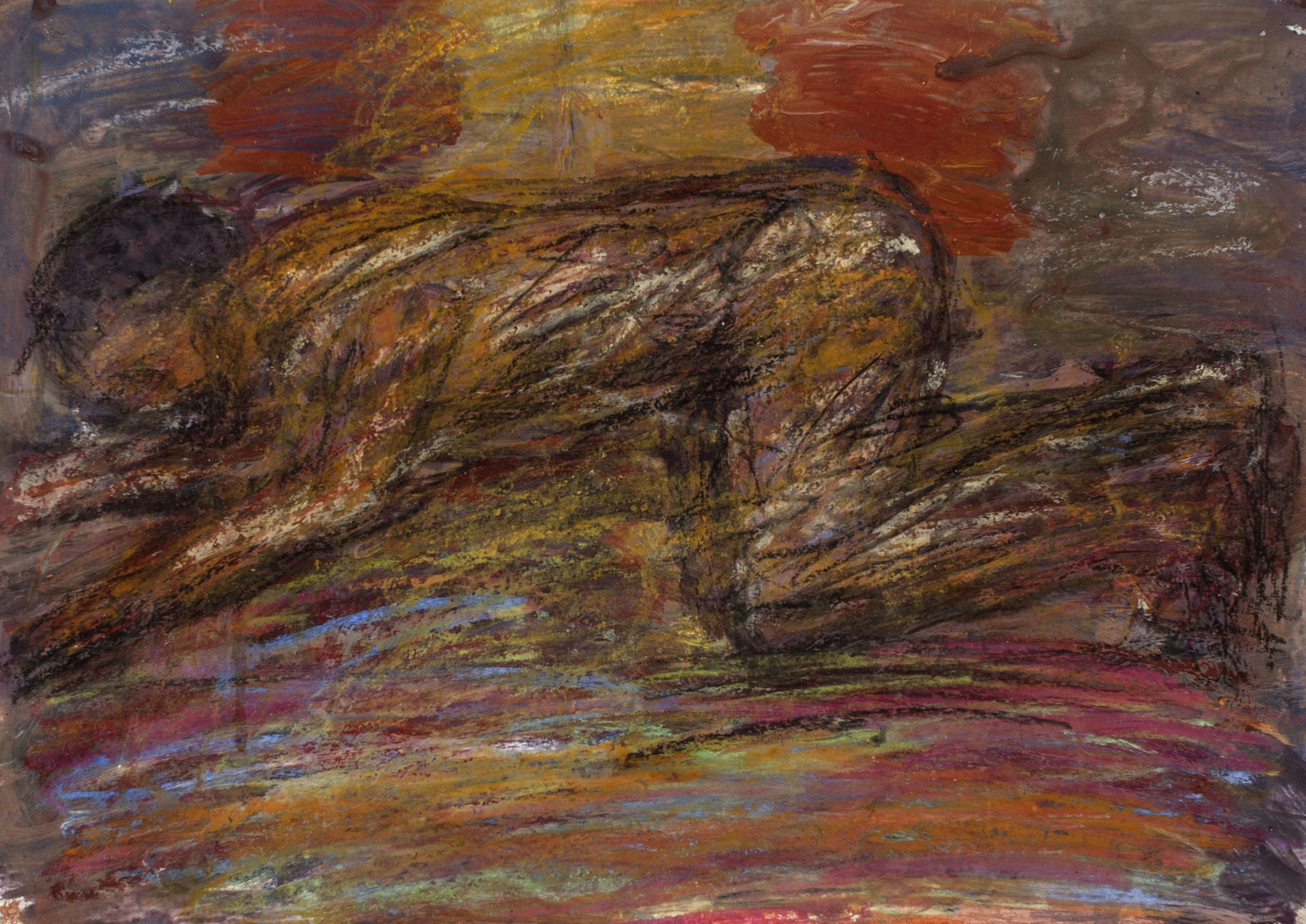 City scenes: The Journey 17 (acrylic and oil pastel on paper) is at the Standard Bank Gallery. (David Koloane)

In one series of mixed media sketches, arranged into rows of three inside a glass cabinet, the artist meditates on the brazier as a multivalent symbol of black urban life and all its historical antecedents.

In a sense, it is in looking at these monochromatic miniature sketches as precursory, or perhaps as cheat codes to his larger, more colourful works that one begins to get a deeper appreciation for how Koloane storms the surface, as it were, and how much of that was governed by intent, and bled into various modes.

If Goniwe’s aim was for us to look and consider deeply, pacing, thematic coherence and the sheer range of inventory are his trump cards here.

At the Wits Art Museum, Goniwe runs into problems of an architectural kind, which impede on his ability to cohere the show visually. With ramps and few walls in comparison to the geographical space, the pieces on display here derive their power more from their singular preeminence as opposed to their collective resonance.

A series of lithographs from the WAM’s collection is yet another example of how lucidly the artist traversed mediums. Elsewhere, works such as Baggage 2, (a relief sculpture/ assemblage work) and Shapes from Cityscapes 1, give a powerful initial impact which waxes and wanes during the show because of the layout of the terrain. 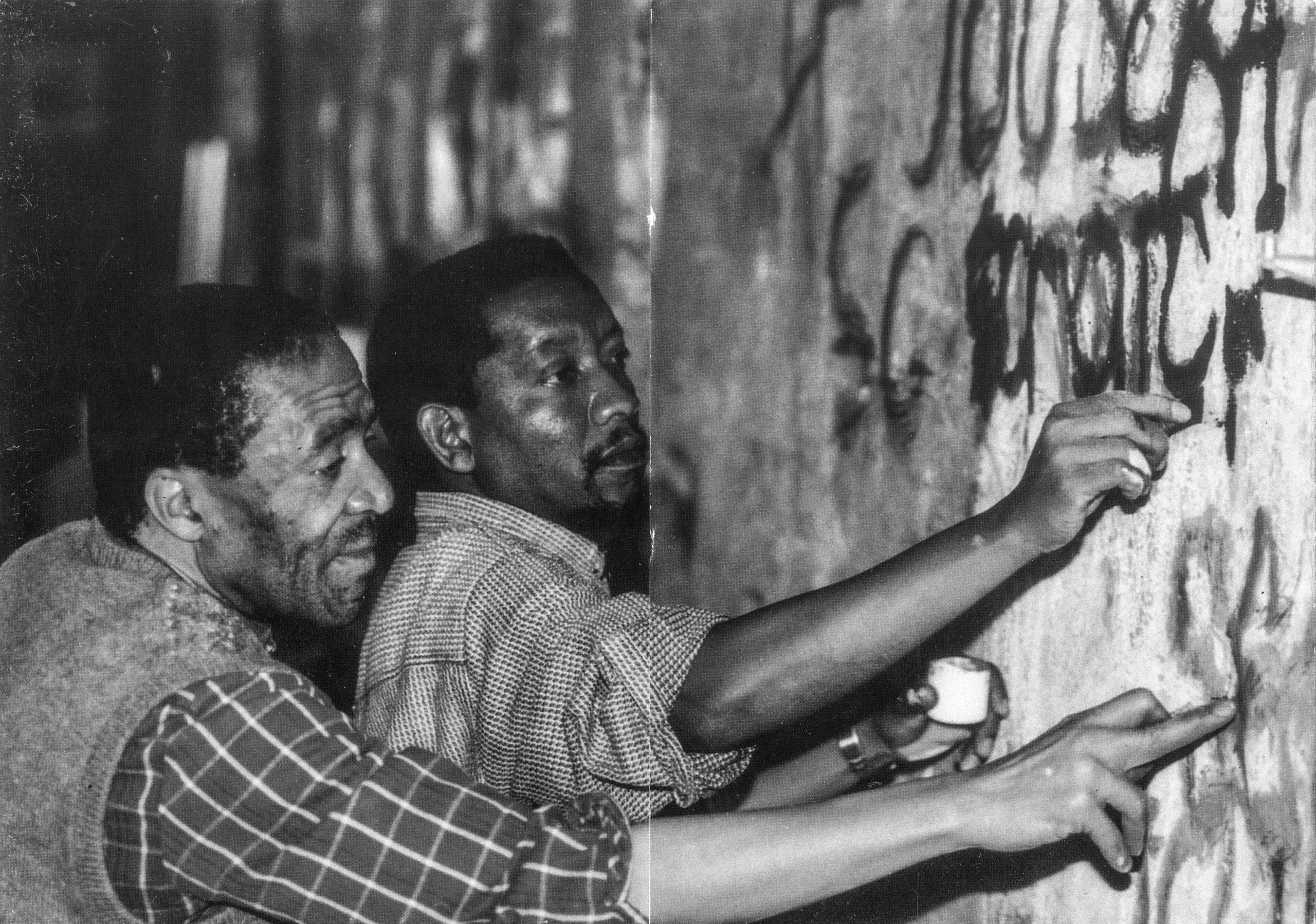 A photograph of David Koloane and contemporary Pat Mautloa at work is on display at the Wits Art Museum.

The interviews, images and tributes from the likes of Pat Mautloa and former president Thabo Mbeki, help us to frame a public aura of the man and perhaps trigger further scholarship on him.

Seen as a unit, though, the two shows suggest the spectre of the man to be larger than life and expanding still — if the curator gets his way.